What is the governments role in informing British Columbians about important information?  Well according to an official government website, under the heading of Government Communications, they state:

"The Government of British Columbia’s external communications role is to inform the public about government’s programs and services. The ministry-based communications teams focus on leadership through proactive strategic planning and by delivering value-added services." 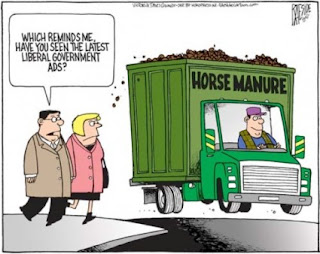 Why is it then, that more and more, with every passing year, government advertising becomes nothing less than a way for the Party in power to blow its own horn?

And one things for certain, this 'external communications role' certainly does provide 'value added services' -- in the form of free self-promotional advertising for the ruling BC Liberal Party.

On May 24th, on Facebook, I made the statement:

There should be an independent office set up to not vet, but to create, non biased "information" ads. This should be entirely out of the hands of the government and its flunky bureaucrats.

I am NOT alone in thinking this.  This comment was made in February 2013, in an article in the Huffington Post:

The NDP says it has discovered the Liberal government is spending more money on self-promoting ads, with still more ads to come.  During the first Question Period of the new session of B.C. legislature today, NDP leader Adrian Dix said leaked government documents show the ads will cost taxpayers $16.4 million, with the Liberals planning new ads to promote the upcoming budget.  He demanded the government ban partisan advertising, especially in the run-up to the provincial election.

Then last November Business in Vancouver ran an article in which they quoted NDP leader John Horgan saying the BC Liberals are “padding the pockets of their political pals.”

“They spend countless dollars, time and energy withholding information that the public asks for, but when the public’s not looking for information they’ve got mountains of money to spend, to bury us in self-congratulatory promotion.”

That same article also quoted Canadian Taxpayers’ Federation B.C. director Jordan Bateman, who called the new campaign “deja vu all over again,” noting that the next election is coming in 18 months.


Bateman said government advertising programs are another way for the party in power to promote its own brand. “BC Liberals, if nothing else, will always go back to the well,” Bateman said. “It’s something that worked for them before. It looks like they’re going to blow a bunch of our money again.”

And now, just 3 days ago on May 26th, Vaughn Palmer, in the Vancouver Sun had an article in which he wrote about comments from the BC NDP's Gary Holman:

“As we enter into the final year before the May 2017 election, we are once again being deluged by government advertising, the main purpose of which appears to be the promotion of the governing party.”

So, back to my own comment from May 24th:
There should be an independent office set up to not vet, but to create, non biased "information" ads. This should be entirely out of the hands of the government and its flunky bureaucrats.

There can be NO DOUBT from anyone that this BC Liberal government, led by Premier Christy Clark, has gone way past governments role in informing British Columbians about important information.

Its advertising is highly partisan -- it should be illegal -- and under democratic reform of government, legislation should be crafted to make it so.  Further ... NO government advertising should be permitted that is not vetted first by an independent watch dog.

Already in recent weeks there has be talk about what the key points may be, in the up-coming election in 2013.  Given that every year millions of dollars are wasted in purely political self congratulatory promotion, we as tax payers must demand it end.

In Kamloops I'm Alan Forseth, and I'd be happy to hear your thoughts and comments on this topic.