MICHAEL CHONG ... I hope this makes it clear. The Conservative Party position on China remains unchanged 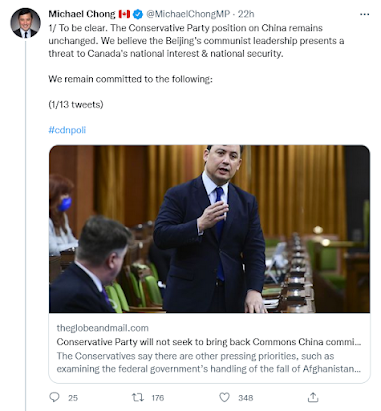 Yesterday, a story in the Globe and Mail yesterday which stated ... The federal Conservatives say they will not launch a bid to resurrect a parliamentary committee that probed Canada-China relations for more than eighteen months ...

Despite that, Conservative foreign-affairs critic Michael Chong made the following statement in a series of Tweets today:

To be clear. The Conservative Party position on China remains unchanged. We believe the Beijing's communist leadership presents a threat to Canada's national interest and national security. We remain committed to the following:

-          decoupling critical parts of our supply chains from China. We remain committed to the recognition of the Uyghur genocide and matching this recognition with an effective ban on imports produced with forced Uyghur labour, like tomatoes and cotton.

-          banning Huawei from Canada’s 5G network and investigating Huawei’s role in the Uyghur genocide through its 24-hour surveillance technology. We remain committed to granting asylum to persecuted minorities, such as Tibetans, Falun Gong and Christians.

-          the people of Hong Kong’s fight for democracy, freedom and the rule of law by supporting a “Young Talents” program for Hong Kong students to study in Canada and waiving Hong Kong asylum seeker’s police records related to pro-democracy protests.

-          advising Canadian universities against partnerships with Chinese companies and organizations in 5 sensitive areas identified by CSIS. We remain committed to issuing a directive banning Canada’s granting councils from funding these partnerships.

-          joining the United Kingdom proposition for a Digital 10 to protect free societies’ data and cyber sovereignty. We remain committed to joining the Quadrilateral Security Dialogue with Australia, Japan, India and the United States to counter Beijing’s threats in the Indo-Pacific region.

-          cracking down on China’s foreign intimidation operations on Canadian soil by making it clear to China’s missions in Canada that any involvement by any diplomats accredited here will be grounds to be declared persona non grata and expelled from Canada.

Conservatives remain committed to standing up to the threats from Beijing AND fighting against anti-Asian hate/discrimination. To do one and not the other either abandons Asian-Canadians or ignores Beijing’s threats.

Conservatives believe we must do both.

We lost several seats with Chinese diaspora last election - BUT not because of our policy on China. We lost because domestic and foreign actors spread disinformation and because we didn’t do a good job countering in Chinese-language media (for example social media platforms like WeChat).

I hope this makes it clear. The Conservative Party position on China remains unchanged.

Conservatives believe that this country's national security and national interest are too important for us not to stay to the course.