For this to succeed, a portion of the funding should come from First Nations governance ... and from the Federal government

For many years now there has been much 'talk' about the so-called "Highway of Tears", which runs along the highway corridor between Prince George and Prince Rupert (Yellowhead Highway #16).  This is due of course to the large number of women who have gone missing along its route (although numbers have been enlarged by some to also include missing and murdered woman from along Highway 97 through the Cariboo, and if memory serves me correct, as far South West as Merritt, BC as well.  They are part of a larger group of Missing and Murdered First Nations women, although not all missing and murdered women from the corridor are First Nations.

You will have noted that I italicized the word "Talk" because that is all that seems to happen -- talk.  "Something must be done" many cry, and yet NO action takes place.

Can I say "Enough already"?

Now I will freely admit that I have no idea of what it would cost, figures are impossible it seems to find out, however a Regional Transportation system is long overdue that will meet the needs required for the North ... one funded by ALL stakeholders, because all of them should be part of the solution!

There are nine communities along the way, between Prince George and Prince Rupert) ranging in size from Prince George with a population of 73 thousand people ... to New Hazelton with just 650.  Each one of those communities benefits, financially, from people traveling this corridor ... from shopping, to accommodations ... to restaurants ... and more.

There are at least nine First Nations communities directly on the Yellowhead Highway.  Many of those communities have been hit by their own members going missing, or being murdered.

There is a Northern Health Connections Route, funded in part by the Northern Health Authority.  All residents of this area, without their own transportation, benefit from this service regardless of what their ethnicity.

And there is BC Transit which already funds regional transportation systems through-out the province -- albeit not on the scale I am suggesting.  How are Regional Transit Systems funded in BC?  The following outlines this information: 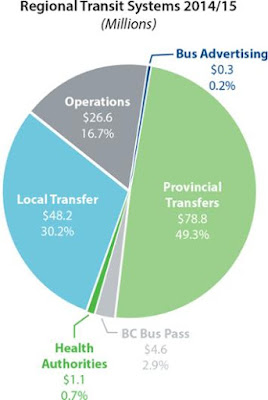 As you can see, transit service is funded through three main sources: provincial contributions, local government contributions and passenger fares ... there is also a small slice of the pie which is Health Authorities.  While I have not been able to confirm this, I would suspect that the Northern Health Connections Route falls into this slice of the above noted pie.

For this to succeed (and that's assuming municipal governments along the route buy in), a portion of the funding should come from First Nations governance ... and from the Federal government.

The federal Liberals campaigned on a commitment to infrastructure funding... and they have also committed (and begun) an inquiry on missing and murdered First Nations Women (this however is not needed to know that adequate and safe transportation is needed along highway 16).  This being so, a commitment from Justin Trudeau and the Liberal government should be a given

First Nations governments, long concerned with the well-being of women in their own communities, must also therefore take part in providing the funding needed to also be a 'part' of the solution.  This should also be a given.

And lastly, funding from BC Transit, and the provincial Liberal government will be needed to create a lasting solution.

It's time to stop passing the buck at ALL levels of government.  The solution is right there in front of your face and all that is needed is for ALL parties to come to the table.  It WILL cost money, lots of it, however residents of Northern BC deserve to have safe and reliable transportation, just like those in Metro Vancouver, Victoria, Kamloops, Kelowna, and elsewhere do.

In Kamloops, I'm Alan Forseth.  Please feel free to share your comments below ... I'm very much interested in what you have to say.