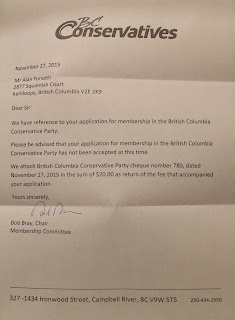 I was asked by a member of the Metro-Vancouver area what this might be about; I messaged back saying:

I asked to have my membership in the party to be removed when a former board / exec make up decided in the spring to reinstate the memberships, and offered apologies, to the dissidents that had essentially destroyed the BC Conservative Party through a coordinated campaign that left the party in a shambles prior to the 2013 election.

It now seems ironic that in asking to have my membership reinstated, I have been denied, for what can only be thought of as a vendetta against me for having the tenacity to call them out on this, and for a lack of leadership in building the party, communicating with the membership on goals it wishes to pursue (and instead asks for every dwindling donations), and for failing miserably in clearly articulating why people should consider the BCCP.

They have offered nothing, and as a result the party is not even considered by the media when questions of BC politics arise, they have practically non-existent support with voters, and a pile of debt.

I, and others, have put forward ideas and suggestions that could change this, however they have been rejected. Case in point?  I offer this:
http://acuriouslookatpoliticsinbc.blogspot.ca/2015/11/without-it-there-will-be-no-one-to.html

Regardless, and despite being declared a member not welcome, I will continue to support and promote a TRUE BC Conservative option for the people of BC.

The Party can ONLY be revived through the will of the members through the grassroots.  This is because the current Board of Directors has been unable, for whatever reason(s), to offer a reason for being that can and will ignite the passions of British Columbians.

Stayed tuned as I will be presenting thoughts of my own of policy ideas.  I will certainly welcome your comments on them, and freely accepting suggestions for improvement.