How many of you have wondered about the TRILLIONS in tax revenue BC was to achieve from LNG ... the tens of thousands of jobs its would create ... how it would lead to a debt free BC ... and that we would have the first of 5, no 3 , no heaven only knows how many ACTUAL LNG plants up and running between 2015 and 2020?
Well here for you are just a FEW of the promises made, and not kept, by the BC Liberal 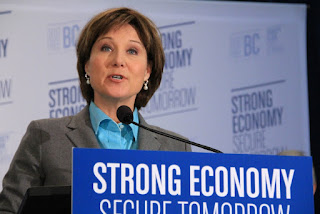 Multiple investors across the natural gas sector have expressed interest in developing LNG export facilities. The first commercial LNG export facility in Canada is scheduled to open in Kitimat, on B.C.’s central coast, by 2015.
CBC’s Reality Check team finds for Clark to make these claims with no deals in place, it's more hype and hope than fact, and we are calling them political spin.
Our latest data indicate that a scenario with five LNG plants constructed in B.C. between 2015-2024 would create a total industry investment of $175 billion creating up to 100,000 jobs: 58,700 direct and indirect construction jobs, 23,800 permanent direct and indirect jobs for operations, and thousands more of induced jobs as a result of households having more income.
Grant Thornton concluded that an LNG industry in B.C., based on five plants operating by 2021, could create more than 39,000 annual jobs over a nine-year construction period and approximately 75,000 jobs once the plants were fully operational - more than 100,000 jobs in total.
AND FINALLY ... Moving forward, we’ll create the BC Prosperity Fund to capture LNG royalty revenues, and dedicate all revenues to debt reduction until provincial debt is eliminated. We’ll also enact legislation to protect the BC Prosperity Fund from becoming a cash-cow for wasteful and desperate government spending. It all starts with setting the right conditions of investment, which will result in a positive final investment decision, which we’re already doing.


Those are a LOT of numbers, and so far only a handful of jobs have materialized.  The NDP really are the No - No - No Party when it comes to resources development and the high paying union jobs it can and will create.  The Greens a diametrically opposed ... and the Board and Executive of the BC Conservative Party is to busy denying memberships to anyone who would threaten their perilous hold on the controls of the sinking Titanic, to even think about job creation policy.

Meantime, the Christy Clark and the BC Liberals have promise development and jobs since the election campaign of 2013, however nothing has materialized other than a handful of jobs for government staff photographers following her around to photo ops for another LNG facility that will also likely never happen.

Strong Economy ... Secure Tomorrow ... when I say is that going to happen?

IS THERE a political entity willing to actually do what it takes to get development moving forward.  It appears there currently is not.  Will one come into being before it's too late and the election of 2017 is upon us?  Only time will tell.