Black Lives Matter Is Not a Hate Group? Sorry but I have to disagree!

J. Richard Cohen is president of the Southern Poverty Law Center, and recently penned a piece in Time magazine entitled, "Black Lives Mater is not a Hate Group".

Sorry but I have to disagree.  Any group that vehemently opposes others, is in my opinion, a hate group.

In this case, it appears that Black Lives Matter oppose, and dare I say 'hate', 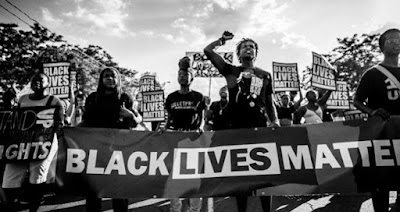 uniformed police officers.  Not just the few who have abused their position, but they seem to have tarred many with the same brush of hatred and abuse.  Police officers, who wear the uniform, are most certainly not all guilty of abuse.

Cohen spoke in his piece saying, "Generally speaking, hate groups are, by our definition, those that vilify entire groups of people based on immutable characteristics such as race or ethnicity."

He also stated that, "There’s no doubt that some protesters who claim the mantle of Black Lives Matter have said offensive things, like the chant "pigs in a blanket, fry 'em like bacon" that was heard at one rally. But before we condemn the entire movement for the words of a few, we should ask ourselves whether we would also condemn the entire Republican Party for the racist words of its presumptive nominee—or for the racist rhetoric of many other politicians in the party over the course of years."

But as I stated, is this NOT WHAT Black Lives Matter (BLM) is doing?  Tarring with the same brush all police officers wearing the uniform?  If so, then they are indeed a self-centred group of individuals, who in their own way do discriminate.

But sadly, I believe this is happening as more and more we hyphenate who we are, and create more and more sub groups to identify ourselves.

The more we hyphenate our identity through (and by) race, ethnicity, self-interest, profession, sexuality ... the worse things become.

Our strength, through what we have in common, is instead being downplayed and berated by what makes us different from each other.

Anytime I get asked what kind of Canadian I am, I answer 'No kind ... I am a non-hyphenated Canadian."

The fact that I am male ... that my ethnicity comes from First Nations ... Italian ... Scandinavian ... Scottish ... and other backgrounds should, and does, play no role for me.  Those 'roots' hjowever, different for each one of us, should be something we can proudly cherish.

Some though have used their hyphenated selves as a tool to get more than their fair share of the pie ... or to say "Look at me, I am down and repressed, I deserve more."

Can we please stop accentuating our differences.  What we have in common is really what makes us strong!  Each one of us is unique ... and each of us adding to the mosaic of society, is what strengthen us.