BESLER: True conservative voices in this province, whether it's the BC Conservatives or Dianne Watts, both have a steep hill to climb

Conservatives, in British Columbia, continue to jockey for support throughout the province. Dianne Watts, former Mayor of Surrey, who had been recently elected to the house of commons with the Conservative Party of Canada, as MP for South Surrey - White Rock; and appointed as critic to workforce development and labour, has now stepped away from Federal Politics to seek the leadership of the BC Liberal Party.

Dianne is an outsider to both the BC Liberal Party, as well as, an outsider to Provincial politics. Yet, Dianne may be just what the BC Liberal Party needs to recover from the aftermath of the recent election. A campaign that left Premier Christy Clark's BC Liberals in a minority government, and defeated by a vote of non-confidence, in the legislature after a throne speech that would have the most ardent socialist jumping to their feet in boisterous applause.

Can Dianne Watts - with her new found partisan credentials - be the unifier the BC Liberal Party needs? Can she bring free-enterprisers together similarly to what Jason Kenney is doing for Conservatives in Alberta?

With 60% of the BC Liberal Party allegedly being affiliated with the Conservative Party of Canada, do the Conservatives need the Liberals more? Or is it the other way around?

The BC Liberal Party has always maintained that they are the official representatives of both the federal Conservatives and Liberals, as a strategic means of keeping the NDP away from holding the reins of power in the province. Thus the holy grail, and most sacred of arguments, is preserved in the split the vote argument which states, “A vote for the BC Conservative / BC Reform / BC Unity etc, is a vote for the NDP!”.

One problem with this argument is that the coalition failed. It failed without an organized split on the right, while having a split on the left. Something that has never happened before in BC history.

The party sliding further to the left became a coalition of chaos. Scandal ridden Liberal organizers from Ontario, like Laura Miller, were flown in from Ontario to lead the campaign -- sidelining local home grown party loyalists. There are just some things about the workings of this province, and in particular BC politics, that you just can't teach an outsider in short order. You can have all the money, statistics, and pollsters at your finger tips, but if you can't interpret the data properly, you lose.

I would like to think that the BC Liberals simply became lazy. The Greens taking up political real estate on the left, and no official organization to mention from the BC Conservatives on the right, meant voters would usher in a massive BC Liberal victory.

I believe that the heart of the matter, of why they were defeated, was in the way they neglected their conservative base. The free-enterprise coalition, when it comes down to it, asks one thing of conservatives, to forgo social issues to protect their pocket books.

Unfortunately, we are being asked more and more to forgo our pocket books as well.

Christy Clark increased unemployment, and hurt small business by forcing higher wages on business ... she was unapologetic in keeping the carbon tax ... she offered to raise MSP premiums instead of eliminate them ... and she offered bailouts to home buyers (because that worked well in the states, right?).

Usually, the BC Liberal strategy is to campaign to the right and govern to the left.

The strategy meant they could count on those conservatives to write the cheques, work the phones, and hand out literature; but when it comes to governance, it's to the “back of the bus” for you. They couldn't even campaign to the right this time!

Next time, here's a tip: conservatives, like most BC 'ers, expect more than shinny white hard hats, and LNG, all the time.

As conservatives tire of forever being cast to play the janitor (who gets to clean house the morning after a drunken liberal binge at a frat house), my ever growing pragmatism begs the question: 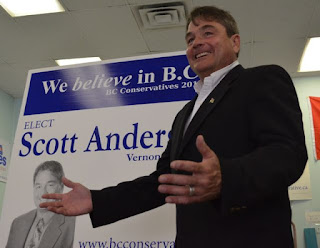 "As conservatives in British Columbia, what choices do we have?  Do we support Dianne Watts, a Conservative in a Liberal / Conservative coalition ... or, do we look to the BC Conservatives?"

Yes, they are at it again. Can you blame them? They have just elected a new board of Directors led by Party President, Ryan Warawa. This past Wednesday (October 4th) they also appointed Vernon City Councillor Scott Anderson, as Interim-Leader, in their ever pressing quest of finding a leader to unite conservatives across the province, in an uninhibited and truly conservative voice of the common man, for the common good all British Columbians!

....Okay, I'd better stop before I get too carried away.

True conservative voices in this province, whether it's the BC Conservatives or Dianne Watts, both have a steep hill to climb.

If Dianne Watts makes it to the helm of the BC Liberal Party and re-brands the coalition, I can still be cautiously optimistic. If not. I can only hope the BC Conservatives will work hard to keep this province a bit more honest.

BEN BESLER ... active in provincial politics and a card carrying BC Liberal - Ben is a former Vice President of the BC Conservative Party, and Regional Organizer for the successful Fight HST citizens initiative.