Why does the provincial government want to make it easier for alcohol to be accessible?  Well I don't wish to be cynical, however here are a few things you may wish to understand and be aware of.  Let's start with this ...

According to the Provincial Sales Tax Act, businesses are obligated by law to charge 10% Provincial Sales Tax (PST) on sales of liquor with an alcohol content higher than 1% (beer, ciders and coolers, mixed drinks, spirits and liqueurs, and wine).  As well, they also are required to charge 10% PST on chill charges, or other extra charges, included in the selling price of liquor. 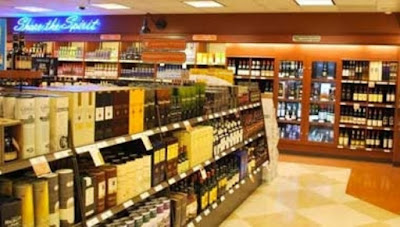 That makes the sale, and consumption, of alcoholic beverages a huge revenue generator to BC's provincial government ... in fact to the tune of hundreds and hundreds of millions of dollars.  And any loss of those revenues would be viewed with (I believe) a great deal of alarm.

So I ask you then, "Is it possible that the loosening of regulations regarding alcohol by impacted in any way by revenue / tax losses?"  You tell me.

Look no further than Business in Vancouver,for a possible answer.  "... British Columbia had the biggest drop in profit from alcohol sales among Canadian provinces in the fiscal year ended March 31, 2014 ... generated almost $877 million in profit from alcohol sales in the 2013 /2014 fiscal year compared with $929.6 million a year earlier (2012 / 2013), according to the nation’s number cruncher."

The BC Liberal government however, was able to rebound just a year later, according to Statistics Canada, as you can see from Stats-Can figures ... when combined with those from the Business in BC article.

Of course during this same period, we've had ever increasing slackening of where, when, and how alcohol can be sold and consumed --- including at more and more family based events.

That's why it should have been no surprise that a BC Liberal media release, on November 16th, 2016, announced:

" ... policy changes from the Province will allow all types of B.C. businesses to apply for a liquor licence, opening up possibilities for new revenue streams and diversified business services ... businesses like barber shops, salons, spas, cooking schools, art galleries and book stores will be able to apply for a liquor licence to diversify their business model and serve liquor to customers ... so long as they do not operate from a motor vehicle or target minors ... "

That led me to write the post "REALLY... there aren't enough places already for people to get a drink?"

Our provincial governments have always been quick to hit us with more and more taxes ... and hidden fees.  Posts I made recently discussed how revenue to the provincial government has increased greatly from gambling sources (as has the misery from those caught up in it's addictions)

Now, with government revenue increasing from added liquor sales and consumption, the government must really be feeling the need to soothe it's own conscience, or at least try and make itself look good. 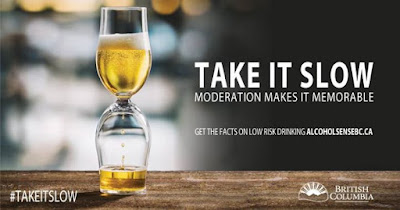 Coralee Oakes (Minister of Small Business and Red Tape Reduction and Minister Responsible for the Liquor Distribution Branch) seemed proud to state that,
“Protecting the health and safety of British Columbians is one of the top priorities of our government. Through this new campaign focused on moderation, we are taking an active role in educating and informing British Columbians about the risks related to alcohol.”

I for one question how governments thirst for more and more tax revenue, from every conceivable stream, can be squared with it's so-called concern for those suffering from addictions ... including gambling and alcohol ... and the related misery it creates for family members of those afflicted?  That along with related accidents and illnesses, mental health issues, social and family problems created along the way ... and costs for our court system and jails.

I ask this especially in the wake of the paltry $58,000 being spent for design, printing, and distribution of materials for this new social responsibility campaign, announced on Friday.

$58 thousand vs. hundreds of MILLIONS in government revenues.  SHAME on Christy Clark ... shame on the BC Liberals!

Sadly, on May 9th, it won't matter if we have a change of government or not.  Neither the NDP or the BC Liberals know how to live within their means, and the despair and misery that comes from that, will continue until such time as WE decide to hold government accountable for its actions.