Dan Brooks hold, on the helm of the BC Conservative Party, seems very much in question


On October 2nd, I wrote a post entitled, "Where will those votes go? Most likely to the BC Liberals, while those individuals hold their noses to place their"X" on a ballot"

I started off by saying:


On September 27th, an online petition suddenly appeared on iPetitions.com. Individuals were asked to sign for the following reason:

QUOTE: "Complaint against Dan Brooks for deliberate violation of party constitution" (please join me in supporting this worthwhile cause)

It lasted for three days, and then was taken down.

What's interesting, and no longer available to be seen, was the comment that Dan Brooks had illegally used the membership list in his quest to regain the leadership of the BC Conservative Party, and some questions as to interference in the website of a fellow leadership candidate.

So, what happened to the petition?  Did the organizers have second thoughts,


or did the Board and Executive of the BC Conservative Party threaten some kind of legal action?  These kind of discussions are generally held in camera, so we will likely never know.....


Fast forward to yesterday, and all of sudden the phone lines lit up with people saying that one of two things had happened:
1)  Dan Brooks had resigned as the Leader of the BC Conservative Party;


Speculation as to what it was all about was not being freely given, although Shane Woodford of CHNL 610 did speak with Dan Brooks. He posted on Twitter saying:


.@danbrooksbc tells me he is still #bccp leader BUT admits there is "some confusion" about leadership vote from some in party #bcpoli 1/2


2/2 @danbrooksbc wouldn't elaborate what the "confusion" is about ldrship vote saying "I don't think I am allowed to talk about it." #bcpoli


One of the things I questioned early yesterday after noon was why the Party was not issuing some kind of release as to what the situation was, knowing Dan's leadership was in question, and in doubt.

As I also mentioned early in the evening, I actually did receive a call, to my home, from an Executive member of the party informing Dan was indeed 'still' leader, however some questions had been raised about his campaign for the leadership last month.  This had resulted in the party obtaining legal council, and that that was where things were.  He did mention however, again, that Dan was still currently the leader.  He also indicated that a media release would be going out shortly.


Well today that did indeed go out, and this is what it said, under the official Conservative Party logo: 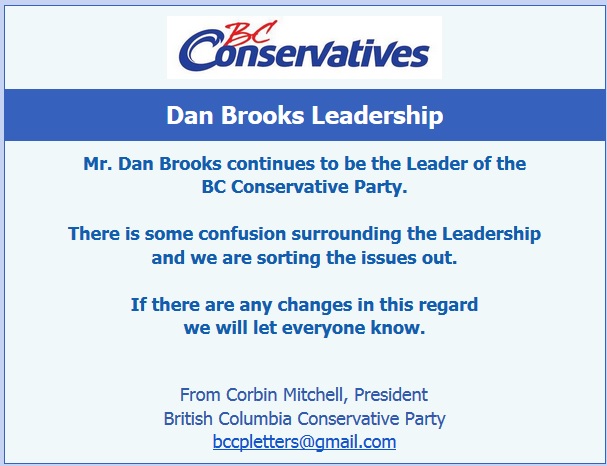 To me, that does not sound very reassuring, and in fact it appears that the 'confusion surrounding the Leadership' are with regards to the possible unauthorized use of the BC Conservative Party database, to access members and email addresses prior to Dan being vetted and approved as an official candidate, and prior to the leadership fee of $5,000 being paid.


I don't know what you think, however Dan Brooks hold on the helm of the BC Conservative Party, seems very much in question ... and it couldn't come at a worse time for the party with just months to go before the May provincial election.


And, if anything I've been told is in fact true, there is a lot more to this story that is yet to be told.