This is the same UN Security council that our selfie-indulging, and pampered, Prime Minter has practically groveled to be a part of. Shame on you Justin Trudeau!


A "UN" envoy in BC, studying housing here, says: "We really need to focus on accountability mechanisms. There just simply aren’t enough mechanisms worldwide dealing with the implementation of the right to housing and ensuring all levels of government remain accountable".

She went further, to say, " ... the International Covenant on Economic, Social and Cultural Rights, under Article 11.1 and that basically says everyone has the right to an adequate standard of living, including adequate housing, food, and clothing.

What do I think?

Yah, about those accountability mechanisms ... and the rights (?) people should have. Maybe instead of taking a blind eye approach and twiddling there thumbs / wringing their hands, the UN could spend some of it's attention on goon countries that bomb and destroy innocent citizens and their homes ... and bomb and destroy their hospitals as well. All the while murdering thousands of innocent citizens. (see "Russian airstrikes killed 9,300 people in past year; including 906 children").


Oh, that's right, Russia has a seat at the Security Council, and has a veto on any discussions that come up. 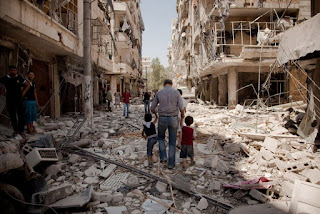 By the way, in case you wondering, the official United Nations website states:

Mandates and the legal basis for peacekeeping The UN Charter gives the Security Council primary responsibility for the maintenance of international peace and security. In fulfilling this responsibility,the Council can establish a UN
peacekeeping operation. UN peacekeeping operations are deployed on the basis of mandates from the United Nations Security Council. Their tasks differ from situation to situation, depending on the nature of the conflict and the specific challenges it presents.

This is the same UN Security council that our selfie-indulging, and pampered, Prime Minter has practically groveled to be a part of.  Shame on you Justin Trudeau!

It's so much easier for the UN to come to a democratic country, and complain about how things are done; it's much safer for them as well.

What a farce!  Why are we even a part of the UN?