Will there rise a demand for a BC only party with NO affiliations (in name at least) to what's offered on the national level?

Until early in the week of October 23rd, a very interesting scenario, in BC politics, was being set up. 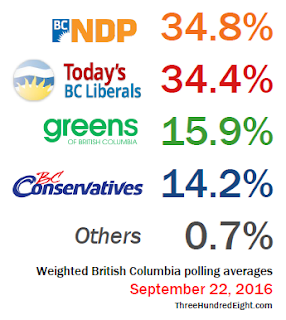 Well it appeared, at least at first glance, that perhaps for the first time in decades, the people of British Columbia might actually have more than two viable parties from which to cast a ballot for.


This time around, again at least until early last week when the BC Conservative Party bounced newly re-elected leader Dan Brooks from his post, it appeared that perhaps, we might again see members from four parties in the legislature.


And with good reason.


2)  Andrew Weaver is beating the drum for Green Party support all over metro Vancouver and the Island, and quickly generating new candidates in ridings all over the province.  It seems like many of these individuals, and even supporters of the party, are being siphoned away from the NDP due to a lack of consistent vision of environmental policy, and ideas, by the NDP.  Likely, and to a smaller extent, supporters are likely being gained from the BC Liberals.


3)  Small 'c' Conservatives have consistently held between 10 to 15% support for the past year now -- that despite on-going range wars, and shoot outs, in the party.  These supporters are true conservatives that desperately wanted a party to support; and with conservative ideals and principles that met with their beliefs.  Regrettably, with the final implosion of the party, those individuals would seem to have no where go when the next election rolls around in May 2017.


4)  BC Liberals.  This is the party that campaigns from the centre-right at election time ... and then governs from the centre-left for the next four years.  Why?  Well that's an easy one to answer.  With no real opposition from the Conservatives, they have been able to pull that vote to them at election time, by saying the right things, and then disappointing those same individuals once they are elected to power.  Sad thing is though, small 'c' conservatives have no other option.


Further to that is what I will call the "Media Party".

Why, when the left is splitting the vote, as the greens are doing, and as the NDP go about disenfranchising their private sector union friends, do we hear nothing about vote splits or bad policy ideas from the media?


Further, why is there nothing but sanctimonious squawking, from this same media party, when the right enter the political arena, or when their policies challenge liberal policies in government?


As the Green Party continues to split the left, the 'split the right' argument will be considerably diminished; and as there will be only left wing voices left in BC politics, the ability for a centre-right party to become a key player in the political landscape, will become more possible.


It will NOT however, be through the BC Conservative Party. Meantime, the Yukon Party, Wildrose Party, and the Saskatchewan Parties have shown there can be a voice on the center-right.


It's too late for 2017, but perhaps out of the rubble of the BC Conservatives, and with a demand to have a true conservative voice, as three parties (Greens, Liberals, and NDP) all crowd the centre-left, will there rise a demand for a BC only party with NO affiliations (in name at least) to what's offered on the national level.


As polls show, there is the demand ... only time will tell.