PLACING MY "X" ... 'Do jobs matter more than governing with honesty, compassion, and forthrightness?' 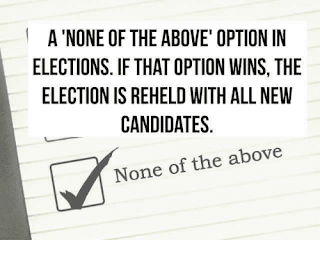 Unless something major happens, to turn things around in what and who the BC Liberals are, then I will indeed go to the polling station on election day.  I will however mark a big X through the ballot to show my displeasure with such poor options (at least in political parties) presented to us.

Sadly ... it will be a first for me, but I see no other choice given the current crazy world of BC politics.
Since then I have had a raging argument going on in my head about what to do.

Vote for Todd Stone because he is the least bad option?

How about Beat Klossner, from the Communist Party, as a HUGE protest at having to vote in an election that won't change anything.  An election about how government in BC functions ... or doesn't except with top-down directives that MLA's must fall in line on or bear the brunt of displeasure at the hands of Christy Clark?

NO ... that's an even more definite "Wasn't going to happen"

During this past week I had decided to vote for Nancy Bepple.  Nancy seems sincere in truly wanting to help the people of the Kamloops area -- and her fight to improve the health care system is one that no one would be able to find fault in.

Problem is ... John Horgan, in his most recent trip last week to Kamloops, flat-out said he do everything in his power to stop the Kinder Morgan pipeline.

I asked Nancy four questions last week; regrettably I did not get a response (I know -- candidates are busy and don't have time to respond).  Having grown up in a small town interior community, this one particular question was important to me however ... and I think it would be to many thousands of residents from the Interior, and Northern BC:

Raw law exports excluded from the discussion, what efforts would an NDP government put in place to end sawmill closures in REAL small town rural BC.  With hospitals, schools, and government services being pulled out in recent years, less and less is holding people in place. Now with logging (and related) jobs also disappearing, what's left for people except to pull up stakes, and make a bad situation even worse for those remaining in these small communities?

I don't believe the NDP do have a real plan for the Interior and Northern BC, and the fact that Horgan has spent very little time in these areas (during the campaign) shows it.  That also shows in the fact that he has come down strong against the Kinder Morgan pipeline twinning, a project that would benefit people greatly in these areas.

Okay so back to the BC Liberals.

While I like Todd Stone, I also have to consider the leadership of the BC Liberals -- and that starts and ends with Christy Clark.  There is a litany of reasons why Christy Clark's leadership is an issue for me ... and it has been for many others as well.  Here's just a small fraction of concerns expressed by news media people, and bloggers:

All of that aside, there was one straw for me however, that broke the camels back -- and it occurred during the televised debate.  Ms. Clark had this question posed to by the nights moderator Jennifer Burke; paraphrased, she asked Clark how she would repair broken trust with the electorate.

With that sickeningly sweet smile, that never left her face during the entire 90 minutes, she said that people were more concerned about jobs ... jobs was and should be our only concern ... because, it was all about her.  Oooops ... I mean jobs.

She was saying we ... you and me ... were (or should be) more concerned about having a job than with honesty in government
Let me ask you this question.

Is a government plagued by scandals ... one with the most disliked leader ... that does 'sketchy' things ... that has lost 'moral authority to govern' ... not one we should be worried or concerned about?

She -- the current Premier of BC -- deflected a legitimate question by answering ... jobs matter more than governing with honesty, compassion, and forthrightness.

That answer alone should infuriate each and every voter ... at least all but the most kool-aid drinking individuals who believe the so-called free-enterprise, big-tent, party can do no wrong.

I've been told it won't make any difference because no one will know.  Well that's not true because you now know what I plan to do tomorrow.  Each and every one of you reading this.

Just over 50% of British Columbians voted in the 2013 election ... and that's disgusting.  Disgusting yes, but somewhat understandable given the choices we have.

Regardless, you are obligated by the sacrifices of those from our past, to cast a ballot.  I don't care who you vote for ... or how you cast your ballot ... just get out and vote.