May 12, 2017
Well ... the election is over -- no one won (yet at least till the re-counts) how ever Spring is arriving regardless.  With thoughts on that, here is Maple Ridge resident Sandy Macdougall;


No other season of the year brings as much joy, hope and boundless energy as Spring. It's enough to make me feel sorry for those poor folks who don't enjoy four seasons.


Spring is the season of renewal in our part of the world. Everywhere you look you can see signs of the miracle of rebirth as nature works its magic.


From golden daffodils and dandelions to magnificent blossoming Oriental cherry trees, the colour palette of Mother Nature never ceases to amaze me anywhere there is a Spring season.


Consider for a chilly moment the Arctic or Antarctic. Other than a few pathetic penguins, starving polar bears or wandering international scientists, if you don't like snow and ice, our polar regions have very little to offer that can rekindle your spirit in the same manner as Spring. Perpetual winter has very little appeal to warm-blooded humans.


The same is true about desert regions which boast of twelve sunny months per year. That's enjoyable for a few months but the enjoyment wears thin. The only relief from the boredom of the desert is in those infrequent years when the arid regions are inundated with a two hundred-year rainstorm following which the desert will actually bloom in a fantastic array of colour and life.

Sadly, this wonder soon dissipates and life in the desert returns to its routinely boring heat and dryness. You can only admire saguaro cacti and other desert plants for so long before you begin to perish from thirst and loneliness.


Meanwhile in the more temperate wilderness, bears will have awakened from their winter hibernation and introduced their cubs to the awe inspiring bounty of nature. Other wilderness creatures will have followed suit.


Even domestic animals have joined in the stimulating atmosphere and brought forth their offspring. We can see and hear Spring lambs, calves and colts cavorting about in farm yards, pastures and fields scattered throughout the countryside. It is an infectiously joyous time for everyone and every living thing.


Only where you can experience a Spring season can you enjoy the creative expectation that flows from cultivating and planting an outdoor garden patch.


A garden can also be a quiet, contemplative place to which you can escape the worries of the world and that's always best enjoyed in Spring.


Of all the marvelous things which can be said about its arrival, personally, the most enjoyable aspect and surest sign that Spring has arrived can be observed through a visit to any local baseball park.


Kids, adults, grandparents and even family dogs have begun the ritual of the ball season. 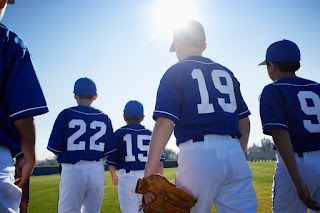 There can be no greater reward than watching your great-grandchildren running, hitting a ball or just having a great time at their local ball park.


Coaches, parents, kids and dogs can be seen scattered along the sidelines of almost every field. In and around the dugouts and whatever seating is available, there will also be the empty, spit out husks of sunflowers seeds.


Young and old players, coaches, parents, ground crews and umpires all add to the upbeat atmosphere where, with the younger players, winning isn't as important as participation.


It's different for older players who have sat around their man caves grouching and griping throughout the winter about the lousy hockey season but, come Spring, they also have a renewed spirit as the slow pitch and fishing seasons unfold. They can also dust off their quads and four-wheel drive toys and once again take to mud holes and off-road areas.


There is no other season of the year in which all of these things can be so easily enjoyed as they can in Spring. We have seen the desert bloom and we have seen the snow, ice and glaciers of the north but none of that beckons to us like being home in the Spring.