It (the current situation) should wake up those who think Clark is right of centre. Will it? Time will tell 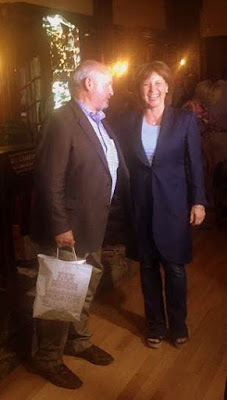 When former MLA and Cabinet Minister Bill Bennett muses aloud about what's to become of the so-called big tent free enterprise coalition ... people really do need to have a listen to what he is saying.

In an article in the Province newspaper on Friday, Bennett (not to be confused with the Kelowna Bennett dynasty) stated:

... the abrupt changes will put pressure on the free-enterprise coalition of centre-left liberals and right-wing conservatives.

“I think there’s likely to be some real angst today on the part of business and fiscal conservatives,” ... the resource sector is likely to be particularly concerned about increasing the carbon tax ...

... challenge will be to deliver the new promises while not compromising the basic principle to balance the budget, pay down debt and maintain the province’s AAA credit rating ... going to be a tall order given some of the new commitments ...

Did Bennett know something he wasn't able to say prior to the election, regarding the future of Christy Clark in the party, and did that play in to him not running again?

Former MLA and Finance Minister Kevin Falcon certainly wasn't singing the praises of Clark on election night, and certainly questioned her future as the scene unfolded while votes were being counted.  And, in the same Province newspaper article from Friday he said he:
... has strong views but would not comment on the throne speech specifics because was still in shock ... “I’m still trying to deal with the magnitude of the shifts ..."

Back to the future of the BC Liberal coalition.

Christy Clark's government will fall later this week on the vote of non-confidence.  Then as long as BC Lieutenant Governor Judith Guichon approves, the Weaver / Horgan GreeNDP government will take over.

That's where the BC Liberal coalitions future comes in to play.

The longer it survives, the better Clark's chance of holding things together for the Liberals, and maintaining her hold on the party.  Once that GreeNDP government falls apart however, what election platform is she going to present, and campaign on?  She already has stolen every planks the Greens and NDP had for the May 9th General Election.

If she abandons them as fast as she did the platform she campaigned on this Spring, what voter will ever believe her (not that she currently and previously had a stellar reputation with voters to start with)?

If she doesn't, then BC voters will have THREE parties running on the center-left.  Meaning the BC Liberals will finally come out and abandon any pretense of actually being conservative.

A former BC Conservative Party President (and candidate in the May 2013 election) Tom Birch, just days ago stated:
"It (the current situation) should wake up those who think Clark is right of centre. Will it? Time will tell."

And on Saturday comments by him, on another social media post, stated:
"... in her throne speech she abandoned everything she campaigned on and promised to implement all the NDP policies that they campaigned on. I think the only exception was that she still plans to go ahead with Site C ..."

Enter the next party running, with hopes of hurdling over the Greens, NDP, and Liberals.  In the Spring election we saw a plethora of parties running ... Christian Heritage, BC First, BC Action, Social Credit, Libertarian, Your Party, and the BC Conservatives.

BC Conservatives of course hold the name recognition with the "conservative" brand.  That said, it has been badly tarnished over the past few years.  Is it ready to try and make a comeback?

Current BC Conservative Vice President Ryan Warawa has been very active, on social media, lately. One of his posts, on Facebook, showed a picture of Oprah Winfrey, microphone in hand, shouting out ... "You get a Billion dollars ... and you get a billion dollars ..."

His comment to go along with it?  Dedicated to those Liberals who preached fiscal conservatism until May 2017, and now are disciples of a tax and spend fiscal plan. 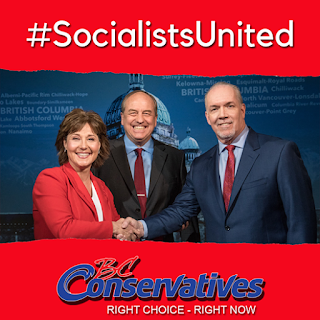 In another, posted alongside this image (#SocialistsUnited) he said:

Dedicated to those hypocrites who have scare mongered about the NDP for years, and support a NDP Throne Speech tomorrow.

Unlike the recent past several years, it appears the party again has at least a few now posting to social media ... and someone gifted in creating memes and images with creative slogans and thoughts.  With that, BC Conservatives, by all appearance, appear to be attempting to position themselves as ... the home for those fed up with BC's three tax-and-spend parties.

But back to Christy and the BC Liberals for a moment.

If we're back for a new election in a matter of weeks, the BC Conservatives will (in my opinion) have no time, or chance, of making an impact.

If however there is closer to a year, maybe more, before the next election, then I believe they may have a chance -- BUT ONLY with a strong and charismatic leader at the helm.  AND ... they need that leader in place right away.

Because he or she will have to immediately start picking off initial low hanging small 'c' conservatives members, and supporters, from what is now plainly a BIG "L" Liberal party.  With their Throne Speech last week, there is little chance of hiding the fact they are little more than a Carbon tax (Ooops sorry meant Copy -- bad joke) of Justin's federal Liberals (which Clark has always been anyways).

And they will have to start talking, very quickly, with BC businesses for support.  That means money, and lots of it.  And pretty much at the same time this individual will need to speak to current disenfranchised conservative minded MLA's, and former MLA's, to get them on board.

That new leader will need to show, through action, that the BC Conservative Party is -- and will no longer be -- the laughing stock of BC politics. 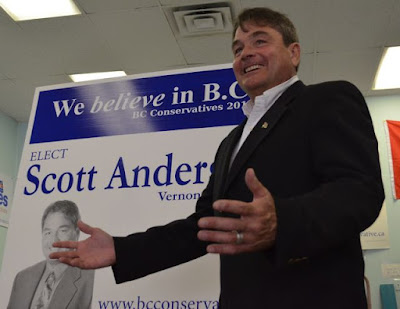 What does the BC Conservative Party Director of Communications, Scott Anderson, have to say, about my comments?  Well my thoughts regarding leadership were neatly sidestepped, however he did pass along this response:

“Everyone recognizes that this Liberal adoption, of the NDP agenda, is a Hail Mary pass in hopes of putting the NDP in a catch 22 situation.  They either have to vote for it, or explain to the voters why they voted against their own platform."

"I think it's exposed what we've known for a long time. Instead of standing for fiscal responsibility, the Liberal agenda is to stay in power at all costs."

But what about that Liberal claim of fiscal responsibility, and representing conservative voters, I asked?

"The Liberals have abandoned the conservative voters they claim to represent, and they've done it in the most blatantly cynical way possible”, he stated.

Anderson went on to say, "Whatever short term gain the Liberal Party may get from this, they’ve essentially destroyed their credibility with small ‘c’ fiscal conservative voters.  They've revealed themselves as willing to do anything to stay in power.  Never again, will they be able to masquerade as the guardian of conservative values.”

Time is short --- VERY SHORT --- so we will have to see what steps they, and other parties hoping to gain traction, do take.

The floors yours now to share your thoughts, on this conversation.