That has never happened before, and most will consider it to be a perversion of democracy 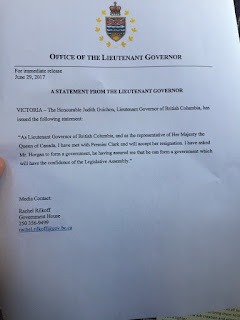 Today in the legislature, a long drawn-out limp to the finish line played out for the BC Liberal Party.  It began this afternoon with parries between Weaver and Clark ... beginning with these words:


A. Weaver: Yesterday the Premier held a press conference in the rose garden, where she stated: "This is isn't a working Legislature, and I haven't seen any evidence that it could work." She further stated: "There's no effort on the part of either opposition party to work together."


Hon. Speaker, she implied that because her government, the government under her leadership, has been unable to advance its agenda — frankly, our agenda — the only option is to subject British Columbia to another election. For weeks, the Premier has delayed a confidence vote that she knows she will lose. Instead, her government has chosen to play political games that are designed to undermine cooperation and stability.


Let me be clear. Stability does not depend on this Premier holding on to power. The Greens stand ready to work with all parties…once the government has demonstrated that it has the confidence of the House


My question to the Premier is this: can the Premier clarify why she made this statement when the majority of members in this House stand ready and willing to work together?


Hon. C. Clark: You know, that member campaigned hard in the election on saying that he was going to be different. Instead, what he's done is decide to just be more of the same.


That member campaigned in the election saying that he was going to be an independent voice in this Legislature, and instead what he's done is decide to sit there and take orders from one of the major parties rather than making up his own mind.


That member said that he supported campaign finance reform and then refused to even look at it when it was proposed in this Legislature. And now that member stands up and says he's willing to work with anybody. Nobody believes you anymore.

I said the same thing a few days ago.  In fact I went so far as to say, on a post to Andrew Weavers story; "Explaining my votes in the BC legislature today":

Principles my buttoo. Andrew Weaver was demanding campaign finance reform, until today. Now he's voted against it. What HE HAS DONE is just showed his true colors... and LACK OF PRINCIPLES. Have fun getting trounced next election Andrew!


Later in the afternoon, in the BC Legislature, Christy Clark stated:
"Now, let me speak to the question that everyone in this chamber has raised in the last few days, because I've heard a lot of people say we've changed. But I know leaders don't lead by refusing to adapt. Leaders do not lead by refusing to hear and refusing to listen."


Let me state ... Clark was full of as much crap as Weaver was.  Neither really care about anything except in Weaver case getting power ... and in Clark's case trying to maintain power.  For Andrew Weaver he unfortunately has not yet come to the realization that come next election the Greens will be wiped out.  And Christy Clark obviously is getting VERY bad advice.  Who in their right mind thought that stealing every election platform idea from the Greens and NDP would do anything except make every British Columbian, no matter what their political leanings, laugh at her pathetic eleventh hour conversion.


Minutes later the Speaker of the House, Steve Thomson, spoke these words that ended sixteen years of government by the BC Liberal Party:

Seeing no further speakers, the question is the amendment to the Address in Reply to the Speech from the Throne moved by the Leader of the Official Opposition, seconded by the member for Cowichan Valley, which reads that:


[Be it resolved that the motion "We, Her Majesty’s most dutiful and loyal subjects, the Legislative Assembly of British Columbia in Session assembled, beg leave to thank Your Honour for the gracious Speech which Your Honour has addressed to us at the opening of the present Session," be amended by adding the following:


"but Her Honour’s present government does not have the confidence of this House."]


"Be it resolved that the motion 'We, Her Majesty’s most dutiful and loyal subjects, the Legislative Assembly of British Columbia in Session assembled, beg leave to thank Your Honour for the gracious Speech which Your Honour has addressed to us at the opening of the present Session,' be amended by adding the following: 'but Her Honour's present government does not have the confidence of this House."

The BC Legislature adjourned at 5:26pm, following which Christy Clark went and spoke with Lieutenant Governor Judith Guichon, and just before 7:30pm came and out said that "retired to make her decision."

What will that decision be?  There are only two choice ... call an election, or offer to NDP Leader John Horgan the opportunity to form government.


My personal opinion is that she'll call on Horgan to form a government ... one which will have the support of the three Green Party members including Andrew Weaver.


That government however will fail as well because the house will be in a virtual tie.  43 for the GreeNDP ... 43 for the BC Liberals ... and the Speaker.


NO British Columbian -- at least the 60% that didn't vote for the Greens and NDP -- will agree with the Speaker of the House voting every time with the government to approve its legislation.


That has never happened before, and most will consider it to be a perversion of democracy.


That government will fall, and then we'll be right back into a brand new General Election.


Now ... we wait for the Lieutenant Governor to decide on if we go straight to an election campaign ... or take a short six to eight week delay for the GreeNDP government before it falls.