Khadr played upon the democratic freedoms and rights that Canadian have

WELL I CERTAINLY STIRRED UP REACTION when my last post went online, as well as other comments, which were made online elsewhere.  People opposed, to what I had to say, had comments which included the following:

Okay, I'm f - - king sick of the idiocy and done with writing a diatribe every single time a friend posts about how they're upset that Trudeau is giving a terrorist $10m. ...


·         God help us. What’s next everybody is “packing”, burning crosses, and having segregated bathrooms.  This rhetoric is disturbing.  Canadians are better than this.


On the other had, numerous people agreed with what I had to say, and also what I had re-posted on similar opinions and beliefs.  Comments included:

...Justin’s reign will run its course. History will show if this is blood money. What bothers me about Justin is his statement, used quite often, “I speak for all Canadians”.

...A little strong perhaps?  Nope.  Trudeau has the wrong finger up though (FYI ... the post on my personal blog had a photo of Justin Trudeau pointing with one of his fingers)

...this is not the Canadian way. its wrong

... traitors are dealt will severely, but here in Canada, we are such a nice, pleasant people, we pay them off, and apologize for any bad words they might have heard ... am I missing something? My moral compass must be skewed...

...You have expressed my thoughts very well ...

So, in hindsight, what do I think now?

I think that like me, many people are angry.  They feel our government betrayed them, by paying millions to a person they believe was a terrorist.

Also like me, they feel Khadr played upon the democratic freedoms and rights that Canadian have. He did this while at the same time spitting on those same rights which we have the freedom to enjoy.  All the while he, his family, and other like minded individuals, were trying to force their beliefs, through terrorism, on others.

Let me say loud and clear ... I personally believe Khadr (and other like minded individuals) want nothing to do with, and are totally opposed, to the freedoms and rights we have as Canadians -- except when it suits them.

Those of the same ilk believe that MURDERING innocent women and children in churches is justifiable.

That mowing down innocent people, with vehicles, is acceptable to the God they believe in.

Bombing people and families in public markets for example, or at marriage celebrations, is okay.

That kidnapping young children from school classrooms is fine


These are individuals who believe that any other number of atrocities, inflicted where people gather, is acceptable.

There is intense emotion on both sides of this situation; and NO ONE can, at the end of the day, say they are 100% right.  Regardless, many Canadians believe that Khadr should never have received one nickel of this blood money. That opinion will not change, any more than the opinion of another who believes he was completely entitled to it.

The whole situation is sad beyond belief, for all involved.  THERE IS HOWEVER A BRIGHT SPOT. 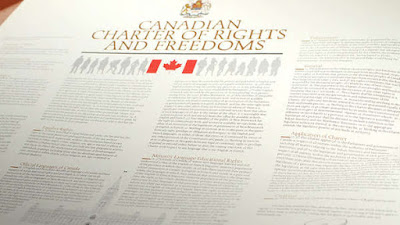 Canadians believe that there are rights, which should be protected, and just a few of them include the following:

... freedom of religion, of thought, of expression, and peaceful assembly

... the right to participate in political activities

... the right to a democratic government

... and legal rights which include the right to life, liberty and security

While we may not agree with what someone else has to say, protecting the freedom to have an opposing belief, means that our opposing viewpoint will be protected as well.

That's what differentiates us from countries where year after year there is war and strife -- terrorism -- child soldiers -- and untold thousands dead and dying.

I'm Alan Forseth in Kamloops.  Meantime, as always, the floors yours; any comments you care to make?