Todd Stone and Peter Milobar, by all means possible, extort this government to end the never ending delaying process of review after review

With all the troubles and strife people in the Cached Creek / Ashcroft area ... and all the way through, and just past, Williams Lake are going through ... it's hard to get worked up -- annoyed -- or just plain miffed at matters that are political in nature.


I mean, really it is.  WITH ONE EXCEPTION.  The recent letter written by Kamloops City Councillor Denis Walsh.  To be fair (to me that is), I did wait five days while I let things simmer to see if what I had thought up first reading his letter, had changed it all.


The letter Denis Walsh wrote to Christy Clark, Andrew Weaver, and soon to be Premier John Horgan had all of the hallmarks of the rabid opposition that has been stirred up for several years now.


It was all filled with all of the buzz words, of doom and gloom, that one would expect ... and even more.  Those included:


...policies on the Ajax mine approval process shock the conscience of the public


...not be allowed to proceed in a discriminatory way


...virtually powerless regarding the approval process and regulation


...the project could pose serious risks to Kamloops residents’ life and health


...direct threat to the lives and security of the persons living below


...an arbitrary abdication of your foremost responsibility 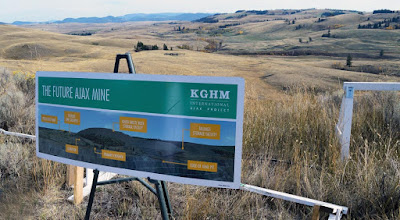 There are apparently numerous groups opposed to the mine -- all of whom are loud and vocal in their opposition to the mine.  The rest of us ... those who are busy trying to work, raise a family, provide advanced education for our children, and help launch them into their own career that will have them doing more than a minimum wage coffee barista, or retail clerk ... just want the mine to go ahead, with the safeguards needed to adequately protect the community.


The problem with Denis, and the rest of to LOUD and VOCAL opponents, is that NOTHING will ever satisfy them --- except for the AJAX Mine to never be built.


Of course they will always say, sure we're okay with mining in general, just not here.  And of course by extension that means or there ... or anywhere ... period.


Mr. Walsh states in his letter:


I wish to hereby formally request that you suspend the permitting process for this mine until the province has undertaken a judicial review of British Columbia’s unacceptable, obsolete and unfair mining practices and regulations, followed by updating and reforms that are found to be necessary.


Well Mr. Walsh, this is what I hereby request:
That our Kamloops MLA's, Todd Stone and Peter Milobar, by all means possible, extort this government to end the never ending delaying process of review after review.  I also hereby request the approval of the mine so those $100,000 plus yearly salaries, the miners will earn, can start creating additional well-paying spin-off off jobs for the people of Kamloops, and the generation who will next be looking for a well-paying job.


I am, and will be, forwarding this piece to Kamloops area MLA's Peter Milobar and Todd Stone, as well as acting Mayor Arjun Singh, so they are aware of MY REQUEST.  It is just as valid as the one (which I believe to be the minority opinion) expressed by Kamloops Councillor Denis Walsh.


Hopefully if you agree, you will do the same thing.


Meantime ... and big thank you to all of the individuals who are working long hard hours ensuring the safety of residents in the interior of BC ... firefighters ... doctors and nurses ... police offices ... councilors ... volunteers ... and everyone else.  No thanks can every been enough.


And now, as always, the floor is now your for comment.