MLA Todd Stone has continued tirelessly through-out BC's current forest disaster. For that, and no matter what our political leanings, he is to be commended

TODAY ... NDP Leader John Horgan will be sworn in as the new Premier of British Columbia.  How long his government, supported by Andrew Weaver and his two Green MLA's, lasts is unknown at this time of course -- we'll just have to wait and see.

Meantime, Christy Clark exits the Premiers office, and her position as leader of the BC Liberals is also be unknown.  Some (many?) say the knives are out to have her replaced, and that of course should be no surprise to anyone.

As to my own Kamloops South MLA Todd Stone; in a Facebook post yesterday, he stated;
As the Interior has been ravaged with wildfires over the past 10 days, it has been by privilege to be on point through this emergency with my colleague, Minister of Forests John Rustad (who has done an outstanding job).

While we have often been the face of government’s efforts to respond to the wildfires and support those most directly impacted, we have the easy jobs compared to those in the public service. I have been proud to work with such incredible public servants as the dedicated professionals in Emergency Management BC, MOTI, FLNRO, Wildfire Service, and the many folks from other ministries and partner agencies.

My confidence that we will get through the current wildfire emergency is rooted in personally knowing the public servants who are in charge - they are the best in the country.

That said, as MLA I will continue to do whatever I can to assist in the emergency 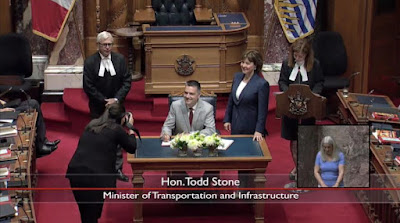 effort and to be there for folks throughout the Interior, as partisan politics has no place during an emergency response – we are all British Columbians, and will get through this challenge by working together and supporting one another.

Mr Stone has continued tirelessly, through-out BC's current forest disaster, in ensuring that things continued as smoothly as this possibly can.  For that, and no matter what our political leanings, he is to be commended.

Meantime ... Green Party leader Andrew Weaver, to what should be no ones surprise, has continued to ride his one pony hobby horse.  What's the reason for the disaster facing BC right now?  This is it, according to Andrew Weaver:

“Sadly, as the effects of climate change take hold, events like the wildfires displacing so many British Columbians are becoming increasingly common”

As I close ... thanks again to Kamloops South MLA Todd Stone for all of his efforts on our behalf.

To in-coming Premier John Horgan, please care for ALL of our province, and remember where the resources come from that fund the vast majority of services in BC.

To Andrew Weaver ... we won't be able to get rid of you fast enough.

In Kamloops, I'm Alan Forseth.  The floors your now, let's hear from you.