Today (March 14th) is Day 55 to the 41st General Election of British Columbia.

MLA Candidates in both Cariboo Chilcotin, and for the riding of Cariboo North, for the 2017 BC Election have not changed as of today:

Cariboo North: Coralee Oakes (BC Liberal incumbent) will go up against Scott Elliott (BC NDP)

Although there has not been an official media announcement (that I'm aware of), tomorrow night at the Quesnel School District Board of Education Meeting, SD28 Board Vice-Chair Tony Goulet will inform his colleagues that he is running in ...
Cariboo-North under the BC Conservative Party banner. 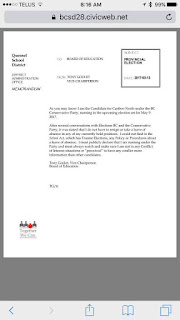 Unless things change rapidly between now (March 14th) to April 18th - there won't be an independent MLA Candidate in either Cariboo North or Cariboo Chilcotin.

Gary Young, who ran as an independent MLA candidate in the 2013 BC Election, has not yet publicly confirmed if he will run again.


Meanwhile in Cariboo-North, Bob Simpson, currently the Mayor of Quesnel and Vice-Chair of the Cariboo - Chilcotin Regional Hospital District Board, an independent Candidate in the 2013 BC Election, recently confirmed to CBC News that he will not be participating in the 2017 BC Election.

DISCLOSURE:  Steve Forseth is the Cariboo Regional District Electoral Area 'D' Director, and also my nephew.  Click Here to view this and other posts on his blog.