FELDSTED -- If Mann’s calculations were correct -- and not ‘doctored’ -- Dr. Ball would have lost the case


Climate Change Dispatch (August 24th): In 2003 a Canadian study showed the “hockey stick” curve “is primarily an artifact of poor data handling, obsolete data and incorrect calculation of principal components.” When the data was corrected it showed a warm period in the 15th Century that exceeded the warmth of the 20th Century.

So, the graph was junk science. But the big question then became: did Mann intentionally falsify his graph from motivation to make a profit and/or cause harm (i.e. commit the five elements of criminal fraud)? 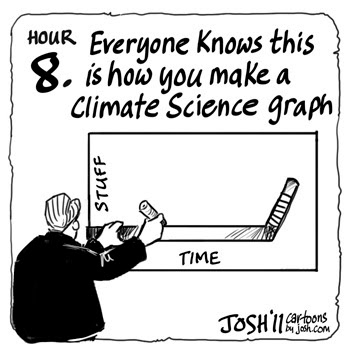 During disclosure proceedings in his libel action against Dr. Tim Ball, Mann was ordered to produce the figures on which his theory is based in order that they might be checked for accuracy.

Dr. Ball’s defence was based on “truth”. If Mann’s calculations were correct and not “doctored” Dr. Ball would have lost the case. Mann refused to reveal his calculation because he would not, or more likely could not prove he had not fiddled with the calculations to create his theory.

In 2003, the University of Guelph had already shown that Mann’s calculations were fraudulent and did not conform to standard statistical prediction calculations. Dr. Ball’s first crucial courtroom win was against Dr. Andrew Weaver, another elite junk scientist (a UN IPCC Lead Author in climate modeling) and British Columbia Green Party Leader.

Dr. Ball’s alleged offence was his statement that the IPCC had diverted almost all climate research funding and scientific investigation to anthropogenic global warming (AGW). This meant that there was virtually no advance in the wider understanding of climate and climate change.

Weaver’s libel case against Dr. Ball was dismissed by the BC Supreme Court last year.

IPCC efforts to silence Dr. Ball through multi-million-dollar legal actions have failed and its key scientists are unable to defend their theory on predicted climate change and global warming. Global warming and climate change is a world-wide exercise in uncritical and unexamined groupthink based on junk science. The enormity of the fraud is breathtaking.

Politicians are always eager to adopt movements they do not comprehend, particularly if it gives them some semblance of control over the masses. They are also fickle and will turn on the IPCC rather than admit they failed to exercise due diligence in adopting IPCC fraud.