“Dangerous ground in my opinion”, says former BC News Director and talk show host, as Sweden takes no substantive action to address or slow the community spread of the virus


Just yesterday, I wrote a post in which I began by asking ...

DO WE CONTINUE THE TREND WE ARE ON, with government strongly encouraging people to self-isolate, and to maintain two metre spacing when we are out getting what should be considered ‘necessities’ – or should we open things up to allow for businesses (including bars) to perhaps re-open, but with strict guidelines as to social distancing? 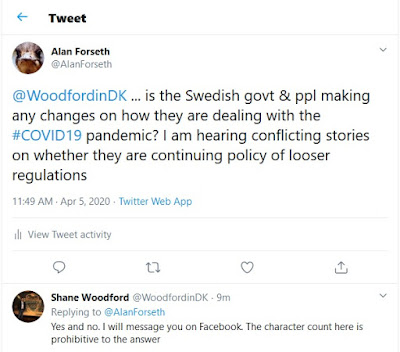 I asked this in light of many people beginning to question whether we are on the right path (using Sweden as the example of a country handling things differently), with the level of self-isolation being asked of us by BC’s Health Minister Adrian Dix and Medical Officer Bonnie Owen, as well as by the federal government.

Personally, as you will note from what I had to say, I believe we are.

It occurred to this morning that perhaps a good source for their opinion, would be Shane Woodford who is now a freelance journalist in the European Union, and who now makes his home in neighbouring Denmark, in the old port community of Faaborg. Shane, as many will recall, is the former News Editor and talk show host at 610 CHNL in Kamloops, and prior to that had been a reporter, for several years, with CKNW in Vancouver.

What I wanted to know, after hearing about how Sweden had been handling the COVID-19 situation up to that point, was if any changes were being made by their government. He remarked that;

“The Swedish government has prohibited crowds of 50 or over,” -- and that as of Friday -- “They have also issued ‘suggestions’ on how people should be doing social distancing.

“The government has also passed legislation giving them the power to take any needed drastic action to curb the virus, without having to go back to parliament, but they haven’t actually used the power ... yet.”

He then continued, “Not much has really changed -- and certainly, no substantive action has been taken to address or slow the community spread of the virus.”

That, apparently, gives Woodford some real concerns it seems, as he concluded by saying; “Dangerous ground in my opinion”.

So with that in mind, I believe I will continue in my belief we are indeed on the right track being recommended by Provincial Health Officer Bonnie Henry, and that it is one we should stay on.

If you want to hear more on this story, you can join Woodford bright and early tomorrow at 6:50 AM, on News Talk 980 CKNW, with host Simi Sara.