One week ago, the government of Manitoba premier Brian Pallister proclaimed the final legislative provisions, and regulations, necessary to officially adopt the New West Partnership Trade Agreement, which it entered into with BC, Alberta, and Saskatchewan in 2016.

According to George Chow, BC’s Minister of State for Trade, the New West Partnership Trade Agreement (NWPTA) was initially put in place between the three western most provinces on July 1, 2010, and was then was fully implemented two years later (2013).

Manitoba’s adoption of the agreement, now means all four western provinces will fully share in the benefits of the New West Partnership Trade Agreement. According to Economic Development and Training Minister Ralph Eichler:

“The potential through the New West Partnership for the creation of quality jobs is in step with our government’s Manitoba Works program, which aims to generate 40,000 new jobs in our province over the next four years.”

“This trade agreement brings opportunities for new growth, and has long been called for by Manitoba business owners and chambers of commerce. It’s a chance for Manitoba to take advantage of its enormous potential with its resource wealth and its central location in Canada and North America.”

Responding to me yesterday, Minister of State for Trade George Chow remarked:

Continuing, he stated, “This economic region represents a market of more than 11 million people and a GDP greater than $750 billion”.

The New West Partnership Trade Agreement commits each of the four western provinces to enhance trade, investment and labour mobility, and to remove barriers to the movement of goods, services, investment and people within and between the jurisdictions.

Just one example of the benefits of the agreement, according to Chow, is that it, “Streamlines the regulatory requirements to start and operate a business and eliminates the need to file multiple registrations and reports between the four provinces.”

BC’s participation in the initial agreement, came about during the term of Premier Gordon Campbell’s Liberal government — with Pat Bell (Minister of Jobs, Tourism and Innovation) bringing forward legislation for the provinces MLA’s to vote on. 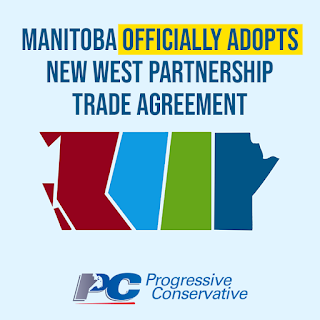 I was unable to get comment from the now Opposition BC Liberal Caucus, however in a media release, on the second anniversary (July 2012) of the initial agreement, then Premier Christy Clark stated:

"The New West Partnership is the gold standard across Canada in removing inter-provincial trade barriers. It proves that the best way to create jobs and lasting prosperity is by working together to make our economies more competitive by reducing red-tape, streamlining regulation and creating a common business market.

Not only has the New West Partnership helped to set the three provinces as economic leaders in Canada, but we are also better positioned to access important Asia Pacific markets."