Previous to today’s announcement, I honestly thought pretty much every segment of society was being provided with assistance to aid them during this time of crisis 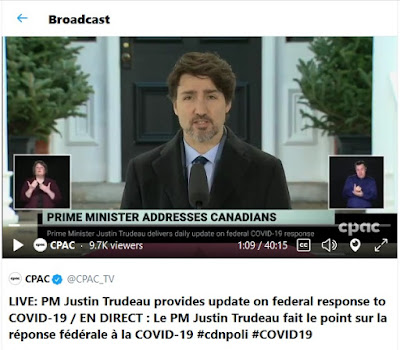 Today Prime Minister Justin Trudeau – LIVE ... from the doorstep – made another of his daily pronouncements. And with it, I am beginning to wonder (well to be honest I already was about a week ago) another cash hand-out.

Justin Trudeau, today announced an investment of $350 million to support vulnerable Canadians through charities and non-profit organizations that deliver essential services to those in need.

According to Trudeau, the government will provide additional support to charities and non-profit organizations through the Emergency Community Support Fund.

“While COVID-19 is affecting all Canadians, some people are more at risk to the impacts of the pandemic”, said Trudeau.

“Today’s announcement will further help our most vulnerable Canadians and ensure organizations have what they need to help. Canadians need to look out for one another in these difficult times. We will get through this together.”

Again ... and I’ve said this before ... the vulnerable in our cities, provinces, and right across the country need support and help.  Where, however, does the multiple, and some (many cases) overlapping services, grants, and income top ups – being provided by the government of BC, and the federal government -- end?

Rent subsidies ... income supplements ... wage top-ups ... deferrals of all kinds ... education assistance on debt repayment.  BC Hydro is offering a three-month bill credit and ICBC has a 90-day deferral for monthly payments ... there’s a freeze on rental rates ... emergency housing continues to expand ... and the waiting period for the EI sickness benefit has been waived.

The Canadian Child Benefit has a one-time (at least for now) $300 boost – per child – coming next month ... Youth in Care won’t age out ... those on provincial income and disability assistance won’t be clawed back on federal assistance they receive during this time ... and the BC Senior’s benefit has been increased by $300

Public transit is now free (as far as I know) everywhere in the province ... the federal government is paying 100% of the student summer jobs program ... and of course the biggy is the Canadian Emergency Response Benefit (CERB) – and that’s in addition to BC’s additional tax-free $1,000 emergency benefit for those on EI on the CERB.

And that’s not even the complete list of what’s available. 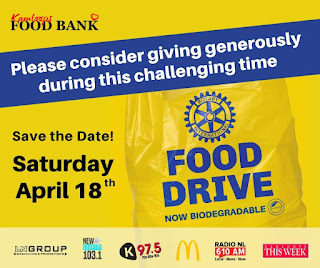 Previous to today’s announcement, I honestly had thought that pretty much every segment of society was being provided with assistance to aid them during this time of crisis – and on top of that, people everywhere were doing their part to help the vulnerable through churches, services clubs, and other spontaneous groups that have popped up.
Just one example from last weekend (and I know there are hundreds upon hundreds of others), was the twice annual Rotary Food Drive to fill the shelves of the Kamloops Food Bank, and according to a story in Kamloops This Week:

... a total of 70,000 pounds of donated food — filing six shipping containers, according to the food bank — was picked up by volunteers on Saturday ...

It’s time for our provincial government, and federal government, to sit down (six feet apart of course), and look at EVERY SINGLE PROGRAM that’s been announced since the COVID-19 pandemic has brought large parts of our country to a stand-still.

Where mergers of programs are needed it should be done ... and no one who can argue that there isn’t a duplication of services happening right now. There is also no one who could, with a straight face, argue that there are numerous households now bringing in far more money than ever before.

This crisis should not be an excuse for government to be careless with programs they are initiating ... we all know who is ultimately going to be responsible for the hundreds of billions this is going to end up costing.

It’s time to end the daily announcements of further cash expenditures – at least until what’s already in place has been reviewed to insure it’s needed, and not already being provided by some other level of government, or charitable organizations.