Who was the face of government then? Does anyone even know, or remember, Clement Attlee?


Earlier today I posted the following comment on social media ...

How many more months does Captain Canada, Justin Trudeau, plan to hide out at Rideau Cottage while Chrystia Freeland and others continue to be face of our federal government during the COVID-19 crisis?

Yes, I was being sarcastic, however there was sincerity to the question that I asked.  After all he has been in self-isolation, with his children, for well over two weeks now.  The original rationale was he was doing so because his wife had contracted COVID-19 during a trip to London; she went into quarantine on March 12th.  Several days later reports stated that Prime Minister Justin Trudeau, and his three children were all feeling fine with no signs of the COVID-19 virus.

In fact, a BBC News story of the day stated:

“ ... Mr Trudeau is in good health and has no symptoms, according to his office, but will remain in isolation for 14 days. There are no plans at present for Mr Trudeau to be tested for coronavirus ...”

As we all well aware, due to announcements from the federal government of Justin Trudeau, Canada’s Chief Public Health Officer Dr. Theresa Tam, the provincial government of Premier John Horgan and BC Chief Medical Officer Dr. Bonnie Henry, we are to stay quarantined for 14 days IF we feel we may have been infected with COVID-19, to allow for sign to show if we have it, and to prevent spread of the disease.

If I have this straight, Justin’s wife Sophie went into quarantine on March 12th ... he never felt any affects of the coronavirus ... and he has still not felt any affects ... nor has he become sick.

Do I have that right?

Today is April 3rd, meaning it has now been 23 days ... over three weeks ... since Justin’s wife Sophie was reported to have the disease.

According to ABC News – March 28th – they stated:

“... Canadian Prime Minister Justin Trudeau's wife says she has recovered from being ill from COVID-19 disease caused by the new coronavirus ...”

That same ABC News story indicated that our Prime Minister was going to continue to stay home to work, to set the right example for Canadians.

Sorry Justin, however you are the leader of our country ... all thirty-seven PLUS million of us.

It’s been said we are in a battle against this disease, and that we’re in it for the long haul to beat it down.

Let me remind the people reading this of another battle of many decades ago – the Battle of Britain.  During that battle, Winston Churchill was Prime Minister; his Deputy Prime Minister was Clement Attlee.

So, who was the face of government then?  Does anyone even know or remember Clement Attlee?


You may not agree it’s a fair comparison, however once this ‘battle’ is over (and if nothing changes) I believe I know who’ll be remembered as it’s leader – and it won’t be Justin Trudeau.

That said, an individual who I know for fact is NOT a Liberal supporter, responded with the following on my post, when asked who should be running the country: 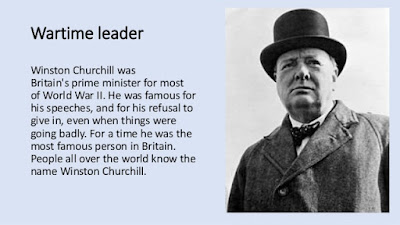 To be fair, another individual stated:

“... he may simply be remaining in isolation in accord with his doctor’s advice. It is also conceivable that parliamentarians are being kept separated for similar reasons ... he responds to the people, through his news conferences daily by answering reporters’ questions ... our democracy remains intact ...”

While it is true our democracy does indeed remain intact, I believe it's time for Trudeau to come out of isolation, and show the full leadership required from a Prime Minister.

He is the one who should be at the head of the government table when announcements are made ...

... he should be the one introducing the people that he himself has selected for their expertise (and who are part of his cabinet) ... as the ones to speak to questions asked ...

... he should be leading from the front of the ranks of civil servants, and Members of the House of Commons ... and letting us know the battle will be won.

If not, who will we remember, in the years and decades to come, as the one who led the country, during one of it’s biggest crises?

Will it be a Churchill ... or an Attlee?