CHRIS LAROUCHE -- I wear and fly our MAPLE LEAF because I am proud of who I am, where I come from and who we ALL are as citizens of Canada 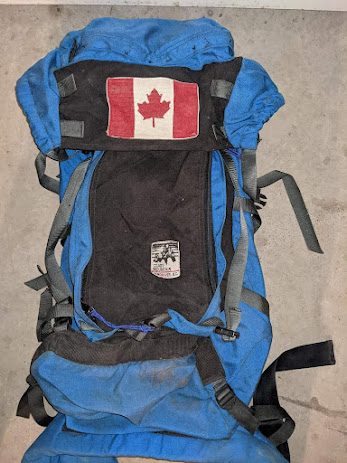 I was nineteen in 1986 and had recently flunked (slacked) my way out of my first year of college. I had a pretty good idea of what I didn’t want to do with my life but had no idea what I actually wanted to do (it would eventually take a few years to sort that out). With that, I decided I would explore what the world had to offer… which happened to be Australia… because friends I knew raved about their hot summers with endless sandy beaches… and what prairie boy who was used to -30C winters and had never seen the ocean before wouldn’t want to spend time on a hot sandy beach?

Being a rookie adventurer, I was essentially flying by the seat of my pants when it came to living the good life out of backpack. I was naïve. I only obtained the actual backpack during a quick pit-stop to an army surplus store in Edmonton on the way to my flight. I had to transfer my belongings over at the airport from the garbage bag I had packed them in.

I bought myself a travel pack. I thought it was a sweet deal… 2 packs in one, a suitcase style larger backpack and a small daypack that both zipped together to form one large, combined bag. It was cheap and poorly designed. It sagged when filled with all my stuff and relied heavily on my back for support rather than my hips and shoulders… in summary it was the most uncomfortable backpack I’ve ever owned… but that’s for another story.

At the surplus store I also picked up a few small (ish) Canadian flags at the army surplus store. As green as I was on the travelling end of things, I knew it was “customary” for backpackers to "fly their flag" (except for many US travellers for some reason). Needless to say, I didn't have much time before I left, but it was a priority for me to get the maple leaf sewn onto my 2 packs in the few days following touchdown in Melbourne.

It seems that things always look a little smaller in the backdrop of a cavernous store.  When the flag was finally sewn on my larger pack, I realized it was somewhat on the large size as it covered almost the whole bottom third of the bag. Although slightly embarrassed, as a proud Canadian I was undeterred. For 6 months I wore (out) that flag on my pack. I had people stop me in the street & pick me up while hitchhiking specifically because they saw that large Canadian flag.

Having caught the travel bug, I planned another longer trip to Europe in 1988. Being a “grizzled veteran” traveller (in my mind), I realized the importance of having a quality backpack that I could wear fully loaded for hours on end... and a new pack called for a new, beefier Canadian Flag.

Not wanting to settle for something store-bought, I turned to my Mom. She willingly and patiently stitched a needlepoint version of the Maple Leaf and sewed it onto my pack. The flag was awesome and exactly what I was after.... vibrant, “bombproof” ... and… maybe a little larger than it needed to be... but once again I was ready to show the world who I was and where I was from.

My pride and reverence for our flag does not end with travel beyond our border:

It surfaces every Canada Day in all the flags taped to windows, fluttering on lawns or on the throngs of people wearing their “red and white” celebrating who we are as a nation.

In the smiles and joy on the faces of newly minted Canadian citizens, immigrants who moved here in search of a better life.

During the national anthem played at local national and international sporting event.

In present or retired uniformed service members at Remembrance Day reminding us all that they have, or still are standing “on guard for thee”.

In a jumbo-sized maple leaf floating around the crowd having been smuggled into the closing ceremony of recent Olympic games.

And in the maple leaf flying at indigenous events and gatherings; honouring and respecting the very country that essentially upended and nearly wiped out their own nation of people.

I am somewhat saddened to see what the flag has come to represent over the past few years. It is obvious, that during recent events, the flag means different things to different people, but I have always held our flag in a place of esteem.

I never considered our flag to specifically mean "freedom". Unlike the Americans who fought the British to become a free and United States under one flag, Canadians have always been free: a member of the Commonwealth but free.

We have fought for the freedom of others but never our own. I have also never worn or flown the Canadian flag as a show of support for a cause; considered flying it upside down; flown it in protest; or displayed it as a point of contention, resentment, or anger.

I never took our maple leaf for granted… it represented me... my nationality… my country… my culture... and most of all, the pride I had in BEING Canadian. In displaying the flag, I was keenly aware I was also representing Canada and knew other people who weren't Canadian may be inclined to judge all Canadians by MY actions.

I wear and fly our MAPLE LEAF because I am proud of who I am, where I come from and who we ALL are as citizens of Canada.

My hope is that someday... maybe in the near future, we can once again come to see the Maple Leaf through the eyes of a naive 19-year-old backpacker just setting out to explore the world.