Unfortunately, Budget 2022 delivers nothing but the same tired NDP rhetoric, and a 10 per cent raise for NDP cabinet ministers 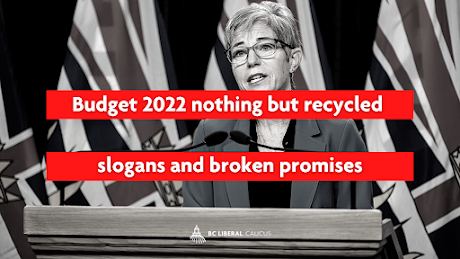 In Budget 2022, the NDP has failed British Columbians and made no progress on key promises like affordability, proving once again that this government is incapable of turning its words into concrete actions.

“Budget 2022 fails to properly address the issues British Columbians really care about — the ones that are on their minds every single day,” said Peter Milobar, BC Liberal Critic for Finance.

“From the absence of measures to meaningfully address the rising cost of housing, gas and groceries, to the lack of progress on affordable childcare, and the continued underfunding of needed mental health and addictions supports, Budget 2022 completely misses the mark. People are looking to the NDP government to solve these problems because they repeatedly promised they would. However, after five years in power and so little tangible progress towards their goals, it’s no wonder people are starting to see that the NDP can’t get anything done.”

In the NDP’s sixth budget, they have failed to deliver on their promises to British Columbia:


“British Columbians were waiting for this second-term NDP government to make their words, slogans, and campaign promises a reality and finally produce real results on affordability,” added Milobar.

“Unfortunately, Budget 2022 delivers nothing but the same tired NDP rhetoric, and a 10 per cent raise for NDP cabinet ministers. With this budget, it’s clearer than ever that the NDP loves big spending on small achievements. People are done waiting for this government to actually follow through on their promises.”