BEN BESLER: Get ready ... Get Set ... Can you feel the excitement? NO? Me neither

That's right folks, the most boring election in BC provincial history is upon us. In fact 5, count 'em, 5 whole weeks until the most avid voters among us take their leisurely stroll to their local voting station, turn to their spouse as they stand in line and ask with a shrug - as I've observed far too often - “who am I voting for?”.

Yes, we will be putting our well thought out mark beside the candidate or party that seemed the most familiar at the time.

The problem is, as you have probably just realized, that many are not aware we are into another election in British Columbia. Sure, in my neighbourhood a fringe candidate from the Green Party has jumped queue and ironically littered civic land with signage weeks before the writ officially will drop, signaling like a referees whistle, that the pleads for your vote will now commence.

Oh, I'm sure there may be a few energized poli-sci students and a handful of old political stalwarts who are eagerly awaiting the phone call from their candidate of choice.  The call will indicate that brochures, and other branding tools, have arrived at the campaign office.  These individuals will in short order see the inevitable – finding those brochures so graciously deposited in the bottoms of garbage cans from the Pacific Ocean to the eastern stretches of the mighty Rocky Mountains.

Yes folks, there is another provincial election upon us once again. Are you ready to rumble?...

The teams and their candidates are all lined up. The Liberals touting their deep red branding will try to hold title with the electorate while facing off to the NDP sporting their own brand of solidarity - with a colour that of which none shall rhyme.

Though the NDP are lined up with benches full, they still seem as though they are ready to defend their own certain title – nay, a tradition – yes, a tradition, of their own. This long held tradition of being the most losingest party the province has ever seen.

The benches may be full, but the bleachers are still empty and the whistle is about to be blown.

Can you feel the excitement!? No? Me neither.

The truth is, when it comes to politics there are real game changers out there that we can be talking about; which in their own way still find ripple effects in BC. M-103, or Trump, or Brexit, for example.

Let's face it. It's not like it was when we were in the lead up to the last election. 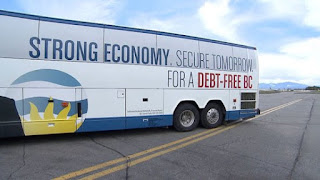 The Liberals were testing out their new leader with a strong vision of a “Debt Free BC”, the BC Conservatives were poised to be a real contenders for the first time since WAC Bennett lost his bid for party leader in 1951, which interestingly signaled the party collapse (somewhat similar to the BC Conservatives 2012 AGM, but lets discuss this another day).

The NDP in the lead up to the last election were expected to form government, and the Greens took their first seat in the Legislature.

And how could we forget seeing the re-election of Vicki Huntington, the lone independent candidate.  That was quite the feat, however she has decided not to run this time.

The 2013 election looked to be gearing up as an exiting election of uncertainty.  It was, too, an election touting new vision and bold ideas.

Those days have come and gone and I'm left yawning, wondering, will I ever see that “Debt Free BC” we were promised?