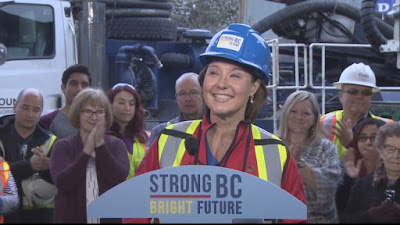 The other day, a friend posted a comment to something I had shared online.

They asked, "Why do politicians feel like they need to dress up when in photo ops?  The kind of dress up that I guess is supposed to say Look at me. I'm just like you"

Well Christy Clark is NOT just like me ... or the majority of British Columbians ... and she really hasn't had to worry much about getting the kind of job the rest of British Columbians struggle to find; one where they can raise a family, and send their children to schools of higher education.

I find her expensive photo ops, where she show up with her phony beaming smile, to be galling.

Which is why at another one of her recent hard hat / safety vest events, in Quesnel this past Friday (April 21st) I found her comments to be irresponsible, or at the very least, careless.  Here's what she had to say:

She might not be scared, but she should be ... and sawmill workers across the province should be nervous as well.

After all, the Softwood Lumber Agreement expired TWO YEARS AGO.  Now, with the provincial election campaign well underway, she is suddenly the champion of workers at BC's sawmills.

Where has she been on this file, that impacts thousands of hard working British Columbians, during the past twenty-four months?

Last time around the United States government imposed billions in penalties to the softwood industry ... and those penalties cost the jobs of FIFTEEN THOUSAND British Columbians. (total taken in tariffs / penalties was $5.3 billion, of which $4.1 was eventually returned).

Have no fear ... Captain Hardhat is on duty, and all alone she will go up against the evil forces of Captain Tantastic as he attempts a Trumptastrophe on BC's forest industry.

While Photo Op's appear to be her specialty, along with B---S---ing the people of BC with phony balanced budgets, she is racking up tens of billions in added debt.  And that's ANOTHER big worry in this issue.

Twenty Seven Percent (27%) of our provincial debt is at a floating rate.  And don't think a big kick in BC's forest industry won't ratchet up interest rates on our debt.

Captain Hardhat ignores this, and other perils ahead, as she shrugs them off and says ... "Don't Worry -- Be Happy".

Maybe that's why Moe Sihota was quoted in a recent article in the Vancouver Sun saying that he, "... forecasts Clark’s defeat in the next election because of what he sees as the weaknesses of her and her party: arrogance, superficiality, and a tendency to underestimate ..."

Potential disaster might be just around the corner but fear not.  Christy is not 'scared of Donald Trump' ... and she's 'not scared of the rich American union leaders.'