It will NOT WORK. And furthermore, I believe it will ONLY INFLICT FURTHER DAMAGE TO THE BC CONSERVATIVE BRAND


This mornings political email avalanche was indeed an avalanche, as always, and it included one from the BC Conservative Party.

The Subject line?  "Electorally enfranchised or no?"

I thought, that's an interesting, what are they up to now?  Turns out I had been made aware of the topic awhile back, in a basic general discussion.  Still I am, and was, surprised that it came to pass.

Here is a copy of today's email. 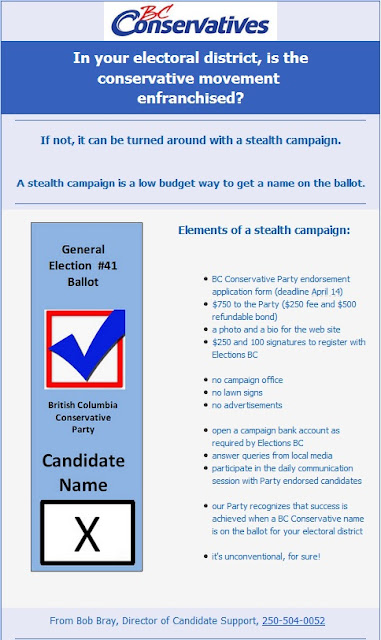 What do I think?  Well, first off, it will not be much of a stealth campaign because everyone is now aware of their intentions.

I also have to say however, that the individual that I discussed this idea with, a few weeks back, probably had the best of intention -- however it will NOT work.  And furthermore, I believe it will ONLY INFLICT FURTHER DAMAGE TO THE BC CONSERVATIVE BRAND.

The BC Conservatives plan is to endorse individuals.  It's unclear from the email I received however, whether they are actually to be BC Conservative candidates.  If discussions previously are what I think this plan is about, then these individuals will actually be running as Independents.  They will however be endorsed by the party.

As you can see, the only support they will have is by being included on the party website (I suspect there will be a separate section for endorsed rather than official candidates), but after that they are on their own ... no campaign signs, no campaign office ... no advertisements.

Having been part of a doomed campaign from the outset, as the Campaign Manager for B C Conservative Candidate Peter Sharp in Kamloops South Thompson, it actually doesn't sound a lot different from the 2013 election campaign actually.  After the party imploded, we were pretty much on our own to try and be a credible option.

As most (all?) of you are aware, I have not been part of the BC Conservative Party for quite some time now.  Still I honestly have a deep down desire that sometime (hopefully before I die) they can indeed become a realistic option for BC voters.

To twist the subject line of the BC Conservative email this morning ... British Columbians are disenfranchised when it comes to have a true small 'c' conservative option to vote for.  Endorsing independent candidates however is NOT the way to go for this election.

It will only ensure that the thinned ranks, within the party, will not have the opportunity to full vet, and then endorse, those who apply.

It will leave the party wide open to an individuals interpretation of party policy, with no control over them.

Media comments made by this individuals, to news reporters, will ultimately be reported as a valid viewpoint of the party, regardless of how crazy it might be.

Individuals in the midst of a campaign, with no support from the party, will feel total adrift and abandoned (see my above comment about 2013 campaign).

That will likely lead to nonconstructive, and pessimistic, comments being made in social media about the experience they are going through.

Here's my message to Bob Bray, Director of candidate support for the BC Conservative Party ... PULL THIS PLAN BEFORE IT IS TOO LATE.

I'm interested in your thoughts on this idea, please feel free to add they to the comment section below.