The number of Canadians donating to charity—as a percentage of all tax filers—is at the lowest point in the past 18 years, and as a share of income the amount lags far behind what Americans give, finds a new study by the Fraser Institute, an independent, non-partisan Canadian public policy think-tank. 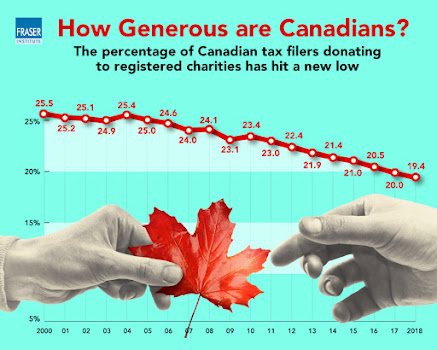 “The holiday season is a time to reflect on charitable giving, and the data shows Canadians are consistently less charitable every year, which means charities face greater challenges to secure resources to help those in need,” said Jake Fuss, senior policy analyst with the Fraser Institute and co-author of Generosity in Canada and the United States: The 2020 Generosity Index.

The study finds that less than one-in-five Canadian tax-filers (19.4 per cent) claimed charitable donations on their tax return in 2018, the most recent year of available data, compared to more than one in four tax filers (25.5 percent) back in 2000.

Collectively, the total amount donated to registered charities by Canadians—just 0.54 percent of their income—is the second lowest amount since at least 2000. Over that period, Canadians’ generosity peaked at 0.72 percent

By comparison, American tax-filers donated 1.97percent of their income to registered charities in 2018—nearly four times the percentage Canadians claimed.

Overall, according to the index of charitable giving for all 64 Canadian and American jurisdictions (including Washington, D.C.), Utah remains the most generous. Manitoba—which moved up from 44th (out of 64) in the 2019 Generosity Index to now 4th—is again the most generous Canadian province.

The increase in the provincial rankings should be taken with caution as at least part of the explanation is a tax change in the U.S. in 2018, which resulted in fewer Americans formally claiming charitable donations even though they may have made donations.

“Despite Canadian jurisdictions seemingly improving in this year’s Generosity Index, Canadians are still donating significantly less to registered charities than Americans, and that’s been the case for many years,” Fuss said.