ERIN O’TOOLE -- So what kind of country do we want to be in 2030? It’s a question we should start asking now.

Canada is facing some of the toughest challenges in its history, but I believe we can come out of this crisis stronger and more united than ever before.

There are many lessons in this crisis, but one of the biggest is the importance of self-reliance.

Never again can Canada be caught unprepared for national emergencies or left utterly dependent on China for critical supplies.

Canada now has an opportunity to rebuild stronger and better than ever before.

So what kind of country do we want to be in 2030? It’s a question we should start asking now.

While it now seems like ancient history, it was only 4 months ago that Canada was paralyzed by a series of lawless blockades. For years, we’ve been unable to get major resource and infrastructure projects done.

This is not the country I want to go back to. I want a Canada that gets things done. I want a country that has a strong manufacturing base and good paying jobs.

I want a country that gets pipelines built and no longer depends on Saudi oil.

After COVID-19, it should be clear that depending on the world’s dictators to supply our energy isn’t just short-sighted, it’s a national security risk.

Canada must become energy-independent and a source of ethical oil for democracies around the world.

The Canada I envision in 2030 will be stronger, more prosperous and more self-reliant than ever before.

If the Conservative Party can rise to the challenge, I truly believe Canada’s best days are still ahead. 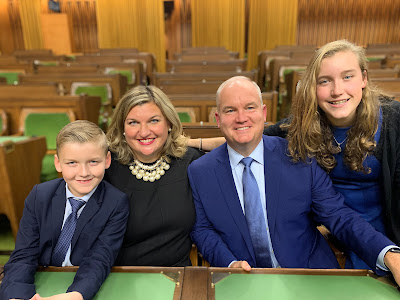 Erin O’Toole ... was born in Montreal. He enrolled in the RCAF when he was 18 and attended the Royal Military College. After 12 years of service, Erin retired from the military and spent the next decade working in the private sector as a corporate lawyer.

He has been elected 3 times in Durham (2012 by- election, 2015 and 2019). He served as Parliamentary Secretary to the Minister of International Trade before becoming Minister of Veterans Affairs, a beleaguered file he successfully turned around within 10 months at the end of the Harper government. For the last two years, Erin served as Shadow Minister of Foreign Affairs.

He and his wife Mollie have two children.