New legislation in neighbouring Alberta will have it become Canada’s second province to ensure convicted sex offenders must live under their own names.

Under Bill 28, proposed changes to the provinces Vital Statistics Act, announced on Wednesday, will require anyone 18 years of age or older to submit to a criminal background check as part of their application to change their name.

Those convicted of designated sexual offenses under the Criminal Code will be ineligible to complete a legal change of name in Alberta. Designated offenses include sexual exploitation, incest, aggravated sexual assault, child pornography, and others.

“Sexual crimes, especially against children, are truly heinous. Prohibiting these offenders from legally changing their names is yet another step we are taking to ensure the safety of Alberta families in our communities”, stated Alberta Premier Jason Kenney.

Alberta already has some of the strongest legislation around name changes and these proposed changes will make it even stronger.

This morning, speaking from Fort St. John, BC’s leader of the Conservatives, Trevor Bolin, echoed the call for change here in BC.

“Premier Horgan, we are asking that you do the right thing, and institute this law immediately in British Columbia. Together with Alberta and Saskatchewan we will be stronger and safer”, remarked Bolin.

“It’s time British Columbia took a stand to protect our children, families and loved ones”. 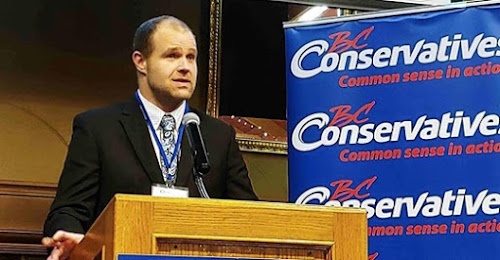 “Those that commit sexual crimes, must no longer be able to hide under fake names in our province.  The opportunity to do so leaves our citizens vulnerable -- and exposed -- to both repeat sexual crimes, and new crimes from predators that are allowed to remain hidden in our communities”, Conservative leader Trevor Bolin remarked.

Former NHL player Sheldon Kennedy, himself a survivor of sexual abuse at the hands of a junior hockey coach, commenting on Alberta’s new proposed legislation saying:

“This legislation takes an important step forward for survivors by better recognizing the lifelong impacts they face and making their offenders face the consequences of their actions daily.”

In February, Saskatchewan became the first province making it no longer possible for people convicted of an offense requiring them to register under the National Sex Offenders Registry the opportunity to change their name.

Concluding his comments, Conservatives leader Trevor Bolin stated; “We call on Premier Horgan, and the BC NDP, to align ourselves with our neighbours to the East, and put a stop to sex offenders slipping through the cracks”.