FORSETH: The truth really needs to come out -- especially why duffel bags filled with cash being dumped on casino counters went on unhindered 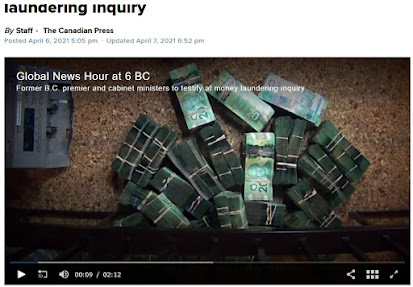 In the past I made comment numerous times that the former BC Liberal government was "addicted" to the revenues they received from the ever-expanding lottery and casino gravy train.

I said it was sick and disgusting, and on top of that, they were robbing (at least in my opinion) monies from community groups and organizations that should have been benefiting from gaming revenues.

On that topic alone, here is what I had to say in December 2016:

All I can say is, it's abundantly clear that while the BC Liberal government continues to strip more and more money from British Columbians, through every increasing schemes for new lottery games and casino expansion, the community groups and organizations that should be benefiting, are instead being shortchanged hundreds of millions every year.

Who do you think should be the recipients of the increased revenue?  I know who Christy Clark and the BC Liberal government think should be ... and it's certainly not community non-profit groups and organizations.

But back to the former Liberal government addiction to gaming revenue, and the questionable behaviors which were happening at BC casinos.

As this news story from last night states, those responsible for turning a blind eye to illegal activity are finally going to be called to testify at the Cullen Commission. Those individuals include former Solicitor’s General Kash Heed and Rich Coleman, former Attorney General and now interim leader of the BC Liberals Shirley Bond, former Finance Minister Michael De Jong, all the way to the top and former BC Premier Christy Clark.

All of these individuals turned a blind eye to millions in unsourced cash that flooded into BC casino’s ... again (in my option) because of their addiction to the revenues it generated for government coffers.

Sadly, it's highly likely they will use 'Cabinet privilege' to get away with saying nothing ... and admitting nothing.

That’s a shame, because the truth really needs to come out --- especially why those duffel bags filled with cash being dumped on casino counters, which we keep seeing in news stories, went on unhindered.