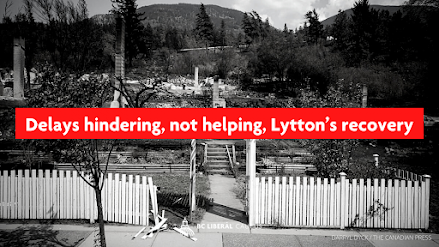 Fraser-Nicola MLA Jackie Tegart and the BC Liberal Caucus continue to appeal to the NDP government, whose failure to respond to the Lytton wildfire recovery in a timely manner has left residents and business owners who lost everything stuck waiting for desperately needed supports.

“It has been 198 days since the fire swept through the village, destroying homes and businesses, and upending the lives of hundreds of people,” said Tegart. “For months now, Lytton residents have been waiting for the support they were promised and the resources needed to start the process of rebuilding their lives.

There is good work being done by the people on the ground to get services back into the village, but many of the key overarching supports promised by the provincial government are nowhere to be seen. They promised to fund the removal of debris from properties, but now, nearly 200 days later, not one permit has been given out to start this process.

For most residents and business owners, the only difference between July 1, 2021, and today, is the snow that’s now on the ground.”

The Insurance Bureau of Canada recently reported that while the insured costs of recovery and reconstruction in Lytton were originally estimated to be $78 million, ​they have ​now increased to $102 million, due in large part to the reconstruction delays in the town.

“It is unacceptable that hundreds of people are now facing their 200th day without a home, while so little progress has been made by the province to get rebuilding underway,” added Tegart. “Now, with this revised estimate from Insurance Bureau of Canada we can clearly see the financial costs of the delays, in addition to the emotional toll on those impacted.

It’s time for our government to treat the situation with the urgency and care these British Columbians deserve and expedite the recovery and reconstruction process today.