I am getting more and more discouraged by the lower quality of products, while still paying the same prices or higher. Just a FEW examples would be added amounts of liquid to tomato paste, cheese spread, cream soups, and lemon spread -- and I'm not talking discount or house brands, I’m talking about the premium ones. Then, of course, we have the ever-shrinking size of packages.

Even worse is the outright gouging going on across the board at the meat counter. It would be one thing if ranchers were doing better, however they are still just barely breaking even. Meantime, everyone else in the food chain is making out like bandits.

Not only do we have to put up with higher prices, but we also get gouged in other ways as well. 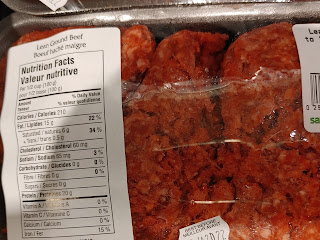 For example, we have so-called Lean ground beef. A couple of weeks back I looked at the huge amount of fat in the frying pan I was cooking ground beef in and thought, that's not right – it’s way more than it was previously. In fact, as you can see from the photo I took just the other day, it appears lean ground beef now has 22% fat content -- the only way to get it that high is to be adding scrap.

Twenty two percent is bad enough, but heaven only knows what the fat content for regular ground beef is – I’m guessing it must be in the neighbourhood of 1/3rd the total weight. Plus, there is the added weight of liquid which just evaporates away.

We are being forced to pay for outright WASTE, and that is NOT, right?

Years ago, when grocers and meat packers were adding more and more fat to ground beef, they had to be mandated as to the total amount they were allowed to put in. That mandate has obviously been tossed out the window as it’s being completely ignored, despite mandated regulations in effect from the Canada Food Inspection Agency.

Even Canada Beef, according to their own website, states the total amount of fat in Lean Ground Beef should no more than be 17%.

As I noted above however, the actual amount being listed on the nutrition label was 22%. That’s an additional 5% in EXCESS FAT – above the allowable amount -- which consumers are being forced to pay.

It seems(?) like the major grocery chains are being given free rein to jack up prices through inflation or ignore mandated content regulations – while at the same time food production giants are diluting the quality of what they are manufacturing, and/or reducing the sizes of what they are manufacturing all the while charging us the same price – or in most cases – a higher price.

My garden has increased in size over the past two years, and it will again this year, so thankfully for at least part of the year I can save money through what I can grow in my own garden – sadly however, that is not an option available to all. Now, if I could only raise a beef cow in my back yard, along with having a trout pond.