SONIA FURSTENAU – What should we expect from healthy government? We should expect accuracy and transparency in the information they provide

Over the last few weeks, my team and I have been preparing for the upcoming legislative session. 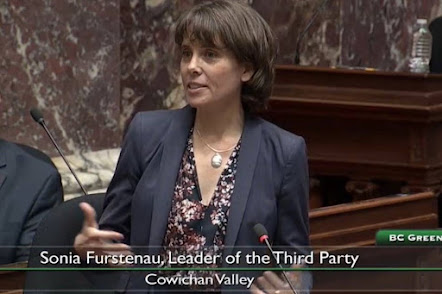 Health, writ large, is obviously of great concern to all of us in British Columbia and beyond right now. As such, reflections on the state of health and healthcare in BC will be a focus in the weeks ahead, both in my writing and in my activities at the legislature.


One of my core beliefs in this regard is that if we are to get health policy right, we need to expand our perception of ‘health’ to our public institutions, our government, our natural systems, and our communities.

How do we promote health in a holistic and thorough way? And what role does government play in that, beyond being a provider of services?

Having a healthy society isn’t just having access to urgent care (which has diminished in recent weeks with record hospitalizations). It’s healthy institutions. For these institutions to be healthy, they need robust relationships of accountability and trust with the people they serve.

General speaking, what should we expect from healthy government? We should expect accuracy and transparency in the information they provide.

In the last many months, this accuracy and transparency has degraded.

Consider the international consensus on the airborne (aerosol) transmission of COVID-19: after many months, the province has failed to definitively shift towards a response which recognizes that transmission occurs beyond the droplet and surface transmission, around which much of the public health information has been developed.

Indeed, as the Georgia Straight reported yesterday, on the second anniversary of the first COVID-19 case in British Columbia, Dr. Bonnie Henry hasn’t referred to omicron as being ‘airborne’ nor has the provincial government developed a public education campaign around airborne transmission.

In October, Mario Possamai – a key figure in Canada’s SARS inquiry – called on the Premier to initiate a public inquiry into BC’s pandemic response and the failure of the government to adopt measures consistent with airborne transmission, noting that he believed this had led to preventable deaths and infections.

There has been a slow reluctance among those leading the province’s public health response to acknowledge that airborne transmission is occurring. But this acknowledgement is insufficient without action.

You can’t say you believe in airborne transmission and then have no policies to reflect this reality.

This behaviour is indicative of a governance structure that has broken from a reciprocal and respectful relationship with community and people - a relationship that must be predicated first and foremost on honesty. A healthy government must build and maintain trust in order to be worthy of the responsibility that comes with speaking truths and care-taking the health of its people.

On Monday, my colleagues and I called for change. We asked the government not only to recognize that COVID-19 is airborne, but to act like it. This means clear and honest communication, the provision of free N95 or equivalent masks, adequate funding for organizations and businesses to update their ventilation systems, and accessible grants for those forced to close or unable to work.

We reiterated our call for an independent science table, which would not only provide accountability for the government’s stated goals, it would also provide clarity for British Columbians on what will effectively mitigate the spread of COVID-19.

We also asked for the reconvening of the all-party Select Sanding Committee on Health, which would redistribute the burden of responsibility for this pandemic, and it would bring back the collaborative nature that allowed us to tackle the first wave effectively.

While we all wish for this pandemic to be over, the truth is that there may be more waves and more disruption. Good leadership would acknowledge these truths and put plans in place for the next wave and the one after that.

Just as we measure health outcomes for ourselves, in our own ways of being healthy, we can measure the health of government and institutions by the level of trust they hold.

If the level of trust is going down, we need a check up.

Sonia Furstenau … is the MLA for Cowichan Valley, and Leader of the BC Greens.