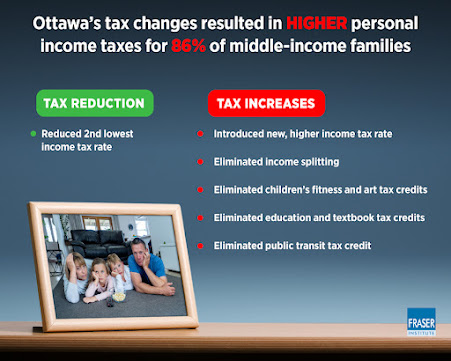 “The federal government has repeatedly asserted that it lowered personal income taxes for the middle class when in fact it increased the personal income tax burden on most middle-class families,” said Jake Fuss, senior economist at the Fraser Institute and co-author of Measuring the Impact of Federal Personal Income Tax Changes on Middle Income Canadian Families since 2015.

In 2015, the government reduced the second-lowest personal income tax rate (from 22 per cent to 20.5 per cent)—but also scrapped income-splitting for couples with young children and eliminated a series of tax credits, which more than offset the savings from the tax rate reduction.

As a result, the study finds that 86 per cent of middle-class families experienced an increase in their federal personal income tax burden—$800 annually (on average).

The study compared federal personal income taxes for families with children in 2015 versus 2019 using a tax and transfer model by Statistics Canada, which includes information for more than 1 million Canadians in over 300,000 households with approximately 600 variables included for each individual.


“By promoting one income tax change and downplaying others, Ottawa paints an incomplete picture of the overall impact of their tax changes, which have imposed a higher personal income tax bill on the vast majority of middle-class families,” said Fuss