And this comment, from MLA Todd Stone, pretty much sums things up .... “It’s complete amateur hour in NDP land folks”


Many, like me, woke up this morning and wondered .... WHAT THE HELL WENT ON last night at the BC Legislature? 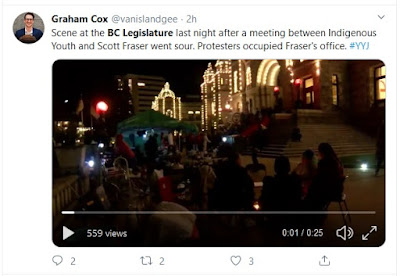 From everything I’ve seen and read this morning, it sounds like Scott Fraser (NDP Minister of Indigenous Affairs and Reconciliation), made a huge mistake by inviting in a bunch of misguided, uneducated, and ill-informed individuals to talk(?) about a situation which is ...


.... over one thousand, one hundred, kilometres away -- near the community of Houston ...


I doubt if many (if any) of those individuals -- who created havoc in the legislature -- have even been to the area, or even have any family members living there.


Last night, they showed their true colours as hooligans, as these first hand accounts show; they are only a few of many!


Ellis Ross ~~ MLA for the riding of Skeena


Last night at the Legislature was wild. MLAs and ministers can bring guests into the legislature, but to bring in protesters, and put legislature security people and legislature staff, in a bad situation is unacceptable. The people’s legislature is closed to the people but protesters are allowed in?


Mike Bernier ~~ MLA for the riding of Peace River South


Well that was the craziest night I have had at the Legislature. Wow!!!  All I can say is what is wrong with people?  You have no idea what you are talking about or protesting, and have zero regard for society and the rule of law. I am embarrassed for BC and Canada as this is not who we are I thought. Horgan and Trudeau need to man up and do something about this!!  Sorry Valerie you got stuck in that mess!! 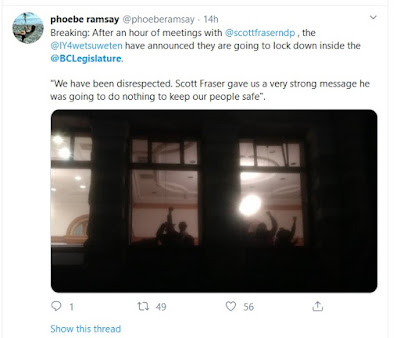 These self-styled, modern day, Chev Guevara guerilla revolutionaries live in relative comfort (when not protesting on the steps of, or storming in, the legislature) ... rather than on reserve where life can be hard, work is scarce, and those amenities often times are not found.

Laurie Throness ~~ MLA for the riding of Chilliwack - Kent


Tonight, the NDP Minister for Aboriginal Relations and Reconciliation let protesters into the building to talk and they wouldn't leave. Police came to the building to arrest some people, but they can't get them out because hundreds of people are blocking the doors. Our Legislature is in complete lockdown and we may not be able to have Parliament tomorrow.


Todd Stone ~~ MLA for the riding of Kamloops South Thompson


Last night, against the advice of security professionals, NDP Minister Scott Fraser brought radical agitators INTO the Legislature, who then refused to leave. What foolish and reckless judgement by Fraser.


Illegal protests, blockades, propane tanks and open fires on the steps of B.C.’s Legislature for weeks now - it all needs to end, but it probably won’t anytime soon because while Premier John Horgan talks tough, his government continues to play footsie with radical agitators.


WHEN, pray tell, is the provincial government of Premier John Horgan going to state – UNEQUIVOCALLY – that enough is enough?


Contempt for the law only breeds more contempt, and these hooligans will simply continue to flaunt and openly challenge authority – for them it’s a game they are playing, under the guise of standing in solidarity with the Wet’suwet’en.


WHAT A LOAD OF CRAP!


These self-styled, modern day, Chev Guevara guerilla revolutionaries live in relative comfort (when not protesting on the steps of, or storming in, the legislature) enjoying all of the amenities of the cities and communities they have chosen to live in – including housing, jobs and education (if they want them), and of course their favorite caffeine beverage drink in a wax lined paper cup with plastic lid --- rather than on reserve where life can be hard, work is scarce, and those amenities often times are not found.

They are clueless about reality, and their obstructionist ways must end.