‘As Conservatives we believe in fiscal responsibility ... government being responsible for millions, to rehabilitate abandoned properties is not, in our opinion, good fiscal management’ -- Conservative leader Trevor Bolin

Two weeks ago, Conservatives in BC gathered to discuss new policy ideas they intend to present to the people of BC in the next provincial general election; this included approval to create three liaison committees to work towards ensuring a stronger, more profitable British Columbia; one, will represent BC’s Energy.

According to the Office of the Auditor General of British Columbia, in a media release from a year ago, “The number of inactive (oil and gas) wells that had not been decommissioned almost doubled—from 3,800 to 7,474—between 2007 and 2018.

Speaking to this problem, the Conservatives indicated a strong belief in a robust job-creating energy sector for our province ... however, one which they also believe should be environmentally sound.

“This is why our new Energy Liaison committee will be tasked with looking at both of these areas when creating energy policy for the Conservative Party of BC”, the party’s leader Trevor Bolin stated to me.

While oil and gas companies are responsible for the restoration of sites, some are abandoned, leaving BC’s Oil and Gas Commission (a crown corporation) with responsibility for clean-up of these orphaned wells. Unfortunately, the orphan fund, to cover site restoration, has been short an average of $14.9 million dollar annually, leaving government, and the people of BC, ultimately responsible for those costs.

“Statistics like these greatly concern us, and we know they also are of great concern to all British Columbians”, the Conservative leader remarked.

Said Bolin, “Our desire is for a strong economy across all sectors of our province – be it agriculture, aquaculture, forestry, mining, or the ever-growing hi-tech sector … however, as we have stated, the days of the BC government straggling strides behind industry, and its people, needs to end”.

“As Conservatives, we believe in fiscal responsibility ... the government being responsible for millions, to rehabilitate abandoned properties is not, in our opinion, good fiscal management.”

“While gas prices have been lower, how much of the difficulties being observed are the result of companies having cash-flows reduced due to multiple review processes, delays, red-tape, and the uncertainty of when companies can even begin to see a return on their investment?”

In reviewing the 2018 / 2019 fiscal year, the BC Oil and Gas Commission indicated it had been a challenging one -- apparently 2019 / 2020 continues to look challenging, as the (Oil and Gas) Commission prepares for further financial impacts to liability management from insolvent companies.

This, is not an indication of a strong economy, led by a strong government”, stated the Conservative leader. 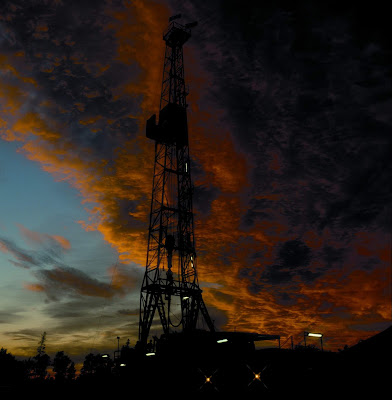 “We know that a strong and vibrant oil and gas resource sector -- with clear guidelines which the provincial government will uphold and protect -- is important for the fiscal well-being of companies working to bring about new developments”.

“Growing up in an area where resources are abundant, can mean great times, and scary times. I have walked pipelines, celebrated birthdays on drilling rig platforms, and been witness to the risks of single industries”.

“British Columbia has much to be proud of, and we as Conservatives are committed to ensuring we are the world class leader in resource development.

“We also know that rehabilitation of these orphaned sites makes us better stewards of the lands, and it will also create more jobs in an industry that should be booming in BC.  It’s our opportunity to show world class leadership -- we are however committed to doing everything we can to reduce the need for wells to be orphaned in the first place.”

Bolin concluded, “I look forward to the formation of the Energy Liaison Committee, and the recommendations it will present to British Columbia’s people -- not narrow special interest groups, that seem to be at the forefront of all Government decisions.”