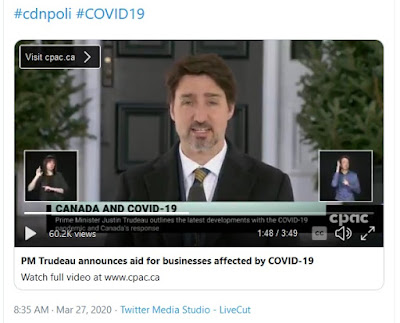 This morning, Prime Minister Justin Trudeau again made his morning announcements, from the front steps of his home, regarding COVID-19.  What’s new?  It’s big ... too big at least in my opinion.

According to Trudeau, the federal government will now pay 75% of a workers salary -- for qualifying businesses -- a SIXTY FIVE PERCENT INCREASE from the previous 10%.

“So, here’s what we’re going to do, to take some of that pressure off. Last week we had announced we would cover 10% of wages, but it has become clear we must do more, much more – so we’re bringing that percentage up to 75%, for qualifying businesses”.

Our Prime Ministers went on to say that ... “We’re helping companies keep people on the payroll, so that workers are supported and the economy is positioned to recover from this.  That, is our priority”

I realize governments, both federal and provincial, need to do everything they can during the current COVID-19 pandemic, however it seems the quick answer to every problem is to shovel out bucket loads of money.

Billions upon billions in subsidies, grants, and outright hand-outs have been announced by Premier John Horgan in BC (as well as every other government leader across the country) and by our Prime Minister, Justin Trudeau.

And where will that money ultimately have to come from?  You, me, and every other taxpayer across Canada.

Did they government need to increase wage subsidies by an additional 65%?  Why not take it to one third – or even 50%.  But paying 75% of an employee’s salary, no matter what is happening, seems a bit – NO A LOT – rich to me ... at least in my opinion.

In a Bill passed in the House of Commons on Wednesday, the government doubled previous spending from $27 to $55 billion – and that doesn’t even count the $55 billion on the books for deferment of taxes from individual Canadians, as well as business.

As of four days ago, the BC government had announced $5 billion in spending for residents and businesses to provide relief from a multitude of new expenses brought on by the pandemic.

While we are indeed basically fighting a war – a war against the COVID-19 pandemic – it should be noted that our country fought an entire world war between 1939 and 1945 ... and they only increased the national debt by $8.2 billion -- the equivalent of $121.6 billion in today's money.

At the rate we are going now, by the time this war to protect Canada’s health ends, we will easily be well past that dollar figure.

Government (at least in my opinion) needs to put the brakes on further spending announcements to analyze the impacts of already announced programs – and further all current spending should be re-examined to ensure it is being provided on a ‘needs’ basis – not an outright grant.

Budgets don’t balance themselves, and money doesn’t grow on trees.  Trudeau was already on track to overspend and increase Canada’s debt by tens of billions of dollars.  Let’s not have this situation make that any worse than it ‘actually’ needs to be.