We cannot continue to be governed by ideologues who draw their inspiration from unaccountable, and unelected, foreign bureaucracies exercising powers they are not entitled to. 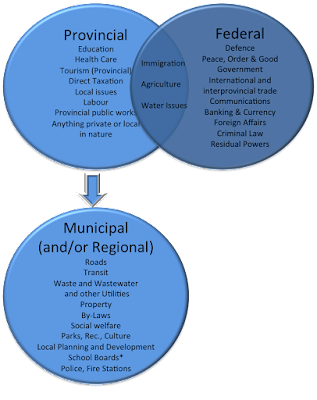 We expect our government to develop a mission statement, establish strategic goals compatible with the mission, and do regular reviews to ensure that work to achieving goals in on track. Thousands of public and private organizations do it as a requirement of responsible governance.

In a free and open democracy, the ultimate power is the individual, the citizen or permanent resident.

We organize ourselves into communities and organize those communities into municipalities that are self-governed under provincial legislation. The Municipal Acts vary a bit from province to province, but essentially allow a municipality, which includes villages, towns and cities to provide local services to residents and to tax property to underwrite the costs of providing those services.

There are practical limits to the services a municipality can provide. Our constitution creates a separate level of local responsibilities for provinces. There are numerous “subjects” where provinces have clear sovereignty over responsibilities within their borders. Once again there are practical limits to the powers of a province. A province cannot afford to fund its own navy or fund armed forces.

The various climate change agreements and accords concocted by the United Nations cannot extend or override the powers granted to the federal government under our constitution.

The United Nations is not a governing body and has no authority in Canada.

The Paris Agreement is a UN construct that our federal government cannot employ. It has no constitutional authority to impose the Paris agreement on Canadians. Doing so violates the principles of a representative democracy.

The development of natural resources, and regulations respecting environmental concerns in that development, is a provincial “subject” and jurisdiction the federal government cannot override.

The idea that the federal government can seize control over multi-billion-dollar investments in development of our resources, based on United Nations treaties, is not acceptable.

Of the 194 nation UN members, there are about 30 democracies. Are we going to willingly allow these dictatorships, monarchies, theocracies and tyrannies to dictate governance to us?

We must wake up, smell the coffee, and tell our federal government that its responsibility to Canadians overrides its ideological dalliance with the United Nations.

Our government was not elected to superimpose UN treaties in governance of a democratic nation.