BC will now join Saskatchewan, Manitoba, Ontario, New Brunswick – all with up to 5 employer-paid days for those impacted by domestic and / or sexual violence 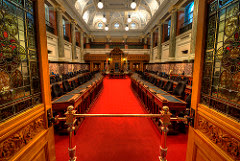 Yesterday, the BC government announced that, pending approval by Members of the Legislative Assembly, there would soon be ... up to five days of paid leave will be available for employees impacted by domestic or sexual violence, or parents of a child or dependent impacted by this kind of violence ...

“People faced with domestic and sexual violence should not have to lose pay when dealing with the aftermath,” said Mitzi Dean, Parliamentary Secretary for Gender Equity.

With the newly introduced legislation, employees will be able to attend to their needs, or the needs of their dependent children or adults, without the worry of losing income from missing work. Employees will have paid leave, allowing them to attend medical, counselling or other appointments, look for a new home or school for their children, and rebuild their lives.

Contacted yesterday, a spokesperson in the Labour Ministry indicated to me that Quebec has up to two employer paid days – while Nova Scotia, Prince Edward Island, Newfoundland and Labrador have up to three employer-paid days.

British Columbia will now join the provinces of Saskatchewan, Manitoba, Ontario, New Brunswick – all with up to 5 employer-paid days. This will leave Alberta as the only jurisdictions in Canada without paid leave provisions.

She continued, “Although the road ahead may be the most difficult one that survivors will encounter, it can make a huge difference having informed and respectful people and processes in place that provide those harmed by these crimes the time to begin to heal.

“That’s where workplaces come in. In my 38 years working in this field, I have known too many survivors who have lost their jobs simply because they needed a few days away from work to deal with the aftermath of violence. Bravo to the Province for putting this support in place.”

The amendments build on improvements made to the Employment Standards Act last year that provided up to 10 days of unpaid, job-protected leave from work for those impacted by domestic or sexual violence.

Stated the BC Liberal leader Andrew Wilkinson, “While there are many issues that our parities disagree on, domestic and sexual violence is not one of them,” says Andrew Wilkinson, Leader of the Official Opposition. “Every member of this Legislature understands the seriousness of domestic and sexual violence and the importance of providing proper supports for victims.”

Green Party MLA and Interim leader Adam Olsen echoed those remarks as well, when he commented late yesterday afternoon that, “It definitely will be passed. Well I should say we are supporting it, and I am assuming my colleagues will also see the wisdom in supporting it”.

According to the BC NDP governments Labour Minister, Harry Bains, the new legislation was shaped by feedback from 6,261 British Columbians, as well as input from stakeholder consultation sessions and written submissions from employers, business associations and employee organizations during fall 2019.

Said Labour Minister Bains, “We consulted broadly, we listened to what people said and we’re making another important step to add to existing supports that will make a real difference in a person’s life when they need it the most.”

The consultation process found that most people, whether employers, employees, as well as support organizations, backed some paid leave for people affected by domestic or sexual violence.

“I know that organizations across B.C. are working hard to help end domestic and sexual violence, but we know that more support is needed. We need to work together to provide those supports for survivors”, said Liberal leader Andrew Wilkinson.

“We must continue to make positive change where possible, and I believe that this bill introduced today is a step towards making this province safer for all British Columbians”, he concluded.