From the cancellation of the Northern Gateway project … to banning tanker traffic on BC’s north coast ... to roadblocks effectively tying up the Trans Mountain pipeline in endless court action and ever-changing rules … to the killing of the Energy East project – the resource industry has faced never ending challenges that have killed important projects for our province – and for our country.

Here’s just a brief refresher for you to check out. 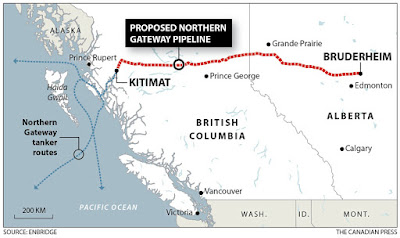 Oil Tanker Ban of BC’s North Coast:
CBC (Nov 2015) "This ban ends the Northern Gateway pipeline proposal," said Karen Mahon, from ForestEthics. "Without tankers, crude oil has no place to go, that means no pipelines, no oil trains moving tar sands to the northern BC coast."

Northern Gateway Pipeline:
National Post (Jan 2016) … alliance of First Nations is celebrating a British Columbia Supreme Court ruling that it says could set back the Northern Gateway pipeline by years and throw a wrench into another high-profile project review

CBC News (Nov 2016) … cabinet killed the Enbridge-backed Northern Gateway … "It has become clear that this project is not in the best interest of the local affected communities, including Indigenous Peoples," Trudeau said.

Trans Mountain Pipeline:
Globe and Mail (August 2017) … BC NDP government warned Kinder Morgan that the company won't be able to begin construction on its Trans Mountain pipeline expansion, as the province pledged to join a legal challenge to ultimately kill the project.

CTV News (August 2018) … (the Federal Court of Appeal) has overturned Ottawa's approval of the contentious Trans Mountain pipeline expansion, halting construction on the project and sending the government back to the review phase

Conservative MP Lisa Raitt had much to say about that, including these comments posted on Twitter:
… Govt created "double standard in the energy sector that's detrimental to Canadian interests"
… When will our Prime Minister see his policies hurt Canadians & economy?
… Liberals put Venezuela, Saudi Arabia, Algeria before Canada. What's our PM got to say?

And now from Justin Trudeau's federal government comes the latest in efforts to stonewall one of our nations biggest economic drivers – key in generating high-paying jobs … and taxes that support Canada’s social programs, infrastructure, health and education.

Bill C-69 was introduced to the House of Commons on February 28th.  Here in part is what PR Associates said it could mean for resource companies:

… “sustainability” defined as “the ability to protect the environment, contribute to the social, economic well-being of the people of Canada and preserve their health in a manner that benefits future and present generations” – this will be a mandatory consideration … legislation has broad terms and lose definitions with very few limits to the minister’s discretion in forming an opinion, thus creating uncertainty for proponents … there are still many opportunities for the minister to “stop the clock” during both the planning and assessment phases, leading to further uncertainty

Finally, we now have several additional efforts to slow and / or halt resource development created by our provincial NDP government, led by Premier John Horgan.  On their own, and presented individually over a number of weeks, they do not appear to be harmful.  In looking at the interlocking aspects of them however, it is clear the direction government is taking.

The first is from October 9th …
... individuals undertaking these activities (mineral exploration and placer mining) became subject to the requirement to obtain an authorization to use water … in addition they would enable an engineer or water manager to require an individual to apply for an authorization to use water if there is a risk of significant adverse impact to the stream or to other authorized users

Next up is BC government news from October 22nd … regarding the Professional Governance Act
The BC government introduced legislation they said was aimed at making sure decisions affecting the province’s natural resources are science-based, transparent and protect B.C.’s unique environment for future generations.  It went on to state its scope was to modernize and strengthen the roles and expectations of qualified professionals in the province … intended to increase public access to natural resource information and ensure professionals are held to the highest ethical and technical standards.

Simple enough, right?  But what will be the expectation on the individuals making these decisions out in the field.  Is there a clear patter of implied, or suggested, expectations by the government?  Will these professionals fear their jobs may be at risk by not following some pretty vague expectations?  I think so.

On to a BC government News Release from November 5th …
… government has introduced legislation to modernize the environmental assessment (EA) of major resource projects … designed to provide a clear and timely path for the approval of responsible resource projects … increase public engagement and transparency and deliver stronger environmental protections … the environmental assessment process in BC is a shared priority between government and the BC Green Party caucus, and is part of the Confidence and Supply Agreement ...

And then moving on to November 21st …
… the amendments will support government’s actions to strengthen environmental protection and remediation in areas where oil and gas activities occur … will ensure British Columbia remains a leader in reducing upstream oil and gas methane emissions, and supports the Province’s habitat protection and recovery efforts

Again ... both of these seem harmless enough, but we need to keep in mind the  direction (real or implied) that our BC government has taken in opposing resource development, and throwing roadblocks in its way.

The Government of British Columbia has released its CleanBC plan aimed at reducing climate pollution, while creating more jobs and economic opportunities for people, businesses and communities.

“The low-carbon economy we build together will bring opportunities and jobs throughout the province, so people can live and work with greater security in the communities they call home,” said Premier John Horgan. “By moving to clean, renewable energy – like our abundant supply of BC electricity – we can power our growing economy and make life better and more affordable for British Columbians.”

In unveiling the CleanBC plan, Premier Horgan said his government has put priority on … reducing climate pollution by shifting homes, vehicles, industry and business off burning fossil fuels and toward greater use of clean BC electricity and other renewable energies …

What direction is government IMPOSING on the BC business community?  It seems that come hell or high water it will be a Green economy, or NO ECONOMY!

Should we be continuing our effects to be more environmentally sensitive and to grow the green economy?  Absolutely!  Does that mean shutting down an existing economy that continues to provide wealth to its workers, and the government?  Absolutely NOT!

It’s time for British Columbians to speak up –- and speak up loudly – to tell our NDP government to stop choking the life out of the resource industry.  Too many jobs rely on it ... and in many cases, the very life of many small towns in rural BC.