Over 20 federal government departments and agencies have responsibilities for fresh water. Are any of them monitoring the North and South Thompson Rivers, for discarded needles that have been handed out by Interior Health?


When it comes to water governance in Canada, the federal government has jurisdiction related to fisheries, navigation, federal lands, and international relations, including responsibilities related to the management of boundary waters shared with the United States, including relations with the International Joint Commission. It also has significant responsibilities for agriculture, health and the environment, and plays a significant role supporting aquatic research and technology, and ensuring national policies and standards are in place on environmental and health-related issues.

To fully understand the federal government's role in water management in Canada, it is important to first understand the interests and mandates of the departments involved in program delivery. Within the federal government, over 20 departments and agencies have unique responsibilities for fresh water. As all levels of government hold key policy and regulatory levers which apply to water management, a central challenge is to ensure that these levers are developed and used collaboratively.

Between all 20 of those government agencies and departments, runs one common theme ... any companies that can be shown to be polluting shores and waterways must be held accountable.

So then what about the bio-hazardous waste, directly linked to the Interior Health Authority, which is littering riverbanks in Kamloops?  I speak not just of the 257,000 needles, ordered from the BC Centre for Disease Control, and then handed out by IHA ... what about the cook tins, sterilized water bottles, wrappers, and pipes also supplied by IHA?

It seems to many in our community all of this – needles and related paraphernalia – are provided without any real plan to dispose of this waste ... in other words, there appears to be no accountability.

In speaking with me earlier this Summer, Kamloops resident Caroline King (co-founder with Dennis Giesbrecht of the citizen inspired needle buy-back program) stated this belief, "I've seen that IHA reports they collect 99% of the used needles, and yet we have collected well over 6,000 ourselves.  Is the 99% figure an outright lie?  I don't know, but if it is true, why is no one privy to information proving that number." 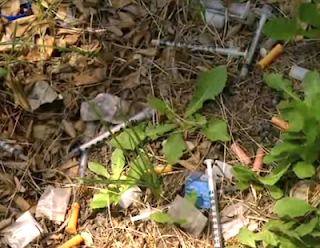 Other residents commenting this past summer were more pragmatic in their comments.  After reading media reports on what the Interior Health Authority (IHA) had to say about the needle buy-back program, a Kamloops resident stated:

"There’s some fairly simple math here. Interior Health passed out 257,000 needles. With limited collection, over 6,000 have been collected. How can we say we are retrieving 99%? I’m happy to see Interior Health stepping up to do more to ensure that used needles aren’t laying around. Hopefully, their improved efforts bring us to a place where efforts such as Caroline's are no longer necessary. But, until then ...

And as of late?  I asked Dennis Giesbrecht about that, and he told me:

“We have recovered over 11,000 so far and many are from river camps”, he began before continuing.  “I know of 400 from a river camp on a single day.  As the Interior Health Authority hands out over 250,000 needles a year, the impact (of discarded needles) by spring will be significant.”

So how are cities across Canada dealing with the issue of discarded needs?  If you Google it, you'll find that volunteers have taken to cleaning up parks, laneways and underneath bridges and alongside rivers in their communities.  Volunteers have also been going out with rubber gloves and garbage bags to pick up the drug paraphernalia left behind as well.

Why is it that by all appearances, the vast majority of work collecting discarded needles, cook tins, sterilized water bottles, wrappers, and pipes, handed by Interior Health, is being done by community residents?

Which brings this back around to responsibility for the protection of waterways such as the North and South Thompson Rivers ... and that standards to protect environmental and health related issues are observed.  Both rivers drastically flood their banks come Spring, at which point months of discarded waste from encampments of those who are homeless, will wash into the rivers.  Thousands of needles ... along with the aforementioned cook tins, sterilized water bottles, wrappers, and pipes.  And again, as previously mentioned, over 400 needles were collected in just one day alone from river camp of the homeless.

Any private company, making this kind of impact on waterways, would be immediately fined and shut down.  Should the Interior Health Authority not be to the same standard as any other industry?

In the city of Kamloops, over a quarter million needles -- TWO HUNDRED AND SEVENTY THOUSAND -- were handed out last year (2017), with no real plan to track and get them back. While a few sharps containers have been set up around town, there is ZERO incentive for the users to actually use them.

It's obvious the current plan (or lack there-of) has failed Kamloops, in a major way.  It has also provided probable and potential harm to at least two groups.  Residents safety needs to become a priority ... along with protection of the environment, including waterways like the North and South Thompson Rivers.

There needs to be a better plan before spring floods ... and it needs to come from the IHA.