THOMPSON: We need more disruption in politics … as opposed to more entrenchment


Dear BC Liberals who opposed Pro-Rep,

The first two times the majority wanted to change, and change is needed. Your assessment that the current system challenges fair regional representation is correct. However, the choice of the Andrew Wilkinson and the BC Liberals to oppose the process, made it a partisan issue -- that choice was errant.

When you opposed Proportional Representation (ProRep) you joined ranks with Bill Tieleman, and other NDP supporters, who wanted it opposed also.

Now, as in the past, a large swath of the population is without representation - the artisan class, farmers, small business people, gig economy people etc ... all have their interests subordinated to the mass of the trio - big government, big business and big labour. We are destined, for now, to the established pattern of politics in BC – furthermore, this outcome has given the NDP what they actually wanted. 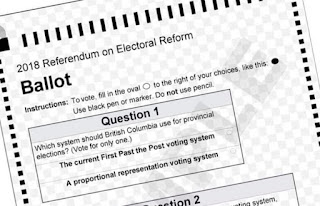 I do share your assessment of the execution of the process, so poor one could deduce the loss was intentional - on the NDP's part. If you believe all people need representation in government, you will lament the absence of reform, and the poor execution on the part of the government.

This was a blow to the 1/3 of the population that is presently being taxed without representation, which leaves the grayness of the status quo is here to greet us.

We need more disruption in politics … as opposed to more entrenchment, which sees a hideous outcome to a hideous process.