ADAM OLSEN: The focus has been largely on the bags of cash dragged into the casinos to be laundered... but ... as we found out ... the problem extends to real estate and luxury cars


Since the beginning of the Spring 2019 session, the BC Green Caucus, has been asking government about money laundering in British Columbia.

The focus has been largely on the bags of cash dragged into the casinos to be laundered by so-called "whale" gamblers.  But, as we found out with Peter German's report, the problem extends to real estate and luxury cars.

Apparently, you can buy a multi-million-dollar house in British Columbia with cash. Few checks and balances and little enforcement.

I asked Minister's Eby and James about these troubling issues again today in Question Period. We must go further, and push harder than we are.  Here is a Transcript from Question Period:

Adam Olsen:
A mind-numbing line of questioning coming from the other side this morning, almost as mind-numbing as the despicable rot that we've been uncovering in British Columbia over the last couple of weeks.

Global's reporting last fall estimates as much as $5 billion has been laundered through Vancouver's real estate market since 2012. This dirty cash is distorting housing prices, and it's playing a large role in the housing crisis gripping our province today. Add this to the allegations of money laundering in our casinos, and this is painting an ugly picture.

According to these reports, over a billion dollars worth of Vancouver property transactions in 2016 alone had links to Chinese organized crime. Hidden ownership of B.C. real estate makes money laundering harder to find and prosecute.

Ending the use of the bare trust loophole is one policy that my colleague from Oak Bay–Gordon Head has been calling on government to act on for years in this Legislature. The Attorney General, himself, has flagged this as an issue that masks the source of money in real estate transactions.

My question is to the Minister of Finance: how is this government continuing to allow the laundering of billions of dollars through our real estate sector?


Hon. David Eby: Thank you, Mr. Speaker, and thank you to the member for the question.

He will know that you find a lot more when you have your eyes open than when you have your eyes closed. So, when we asked Dr. German to have a look at what was happening in the casinos and he came back and he said, "Wow, you know the overwhelming majority of people bringing bulk cash into casinos list their occupations as being real estate-related.

Maybe we should have a look at whether this money is making its way into the real estate market as well," we sent him off to do that work. Simultaneously, the Minister of Finance assembled a team of experts on the issue of money laundering and real estate to identify measures we could take right away.

She's got a white paper out on beneficial ownership to move forward with legislation to establish a beneficial ownership registry so we actually know who owns the real estate. Transparency International Canada— when they looked at 100 of the most valuable properties in Vancouver, for almost half, they couldn't figure out who owned them, because they were owned by offshore trusts, numbered companies, students, if you could imagine — the most expensive residential real estate in Vancouver. 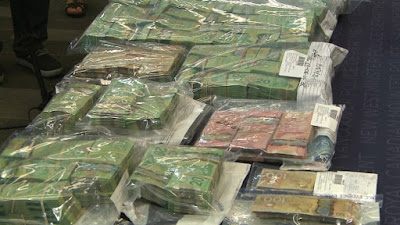 Mr. Speaker ... Saanich North and the Islands on a supplemental.

Rampant money laundering left unchecked by the former B.C. Liberal government helped fuel the housing crisis that is the cause of the deepening sadness in this province. The reports commissioned by this government, due next week, will no doubt daylight more issues, but what is needed is immediate, concrete action to stem the tide of dirty cash polluting our real estate market.

We cannot afford to wait, so my question again is to the Minister of Finance: what is the ministry going to do to further act on these issues that continue to come to light?

Hon. Carole James ... Thank you to the member for the question.

I think all of us, when we see the housing crisis and know the kinds of loopholes that were completely ignored in this province, know that we need to get on with the action, and we've begun already. I'm very proud to announce that, in fact, today we started Canada's first registry around condo flipping and strata flipping, again, to gather information.

This will be a first across the country, and as the Attorney has said, it's critical to shine a light on the behavior that's going on. That's the first step. Then further action will be taken. We will be looking at the beneficial trust. We will, in fact, be putting together a registry, publicly searchable, that will disclose who's behind corporations, who's behind partnerships, to ensure that there's that transparency there.

We're already starting to see that having some action in the Lower Mainland, in particular, when we look at housing prices. But we know much more needs to be done. We're looking at all the financial institutions, all of the real estate areas. Our expert panel will be reporting in March.

I look forward to further action, because housing should be there for people, not for speculators and not for money launderers.