FELDSTED: “It is impossible for the Privy Council to be politically neutral, when it is acting as a secretariat for the Prime Minister, and is populated by government MPs and Cabinet Ministers”

Prime Minister Justin Trudeau says Canadians should "pay heed" to the country's top civil servant, who testified Thursday there was no inappropriate pressure placed on Jody Wilson-Raybould to override a decision to prosecute SNC-Lavalin

.... Trudeau said the government has a fundamental responsibility to preserve jobs and promote economic growth while respecting the rule of law and an independent judiciary. 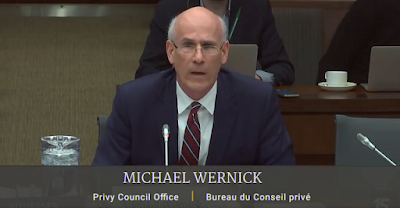 This pair of airheads are incapable of recognizing when they are in a breech of ethics. They have, by their own admission, tried to influence the decision of the Justice Department to prosecute SNC-Lavalin in criminal court.


Trudeau’s arrogance is boundless. Why are we are supposed to heed the advice of his secretary? Let me acquaint you with how Michael Wernick came to be Justin Trudeau’s secretary and lap dog. I am sure he does not know.

We have to go back to the spring of 1940 when Canada was at war with the Axis. Prime Minister W. L. Mackenzie King faced a unique series of events:


The Cabinet was overwhelmed with extra duties brought on by the war effort and the Executive arm of government (Governor General and Privy Council) were dysfunctional. Mackenzie King passed an Order in Council that made the Privy Council the secretariat of the Prime Minister and cabinet to increase manpower for the cabinet. It was a sound decision based on the situation at the time.


Mackenzie King’s 1940 Order in Council cannot override the
constitution, or diminish the Executive powers vested in the Queen.


The die was cast, and although the status of the Executive arm should have been restored following the end of WW2 it was not. Prime Ministers since have continued to use the Privy Council as a secretariat which Is contrary to the terms of our constitution and to the Governor General’s Letters Patent.

The government of Canada is made up of four sections:


Mackenzie King’s 1940 Order in Council cannot override the constitution or diminish the Executive powers vested in the Queen. The Prime Minister’s office as currently configured is unconstitutional and that has led to autocratic rather than democratic governance.

The Governor General’s office should not be filled by an appointee of the PMO.

The Governor General must be a politically neutral representative of the people and base his or her decisions on what is best for the people rather than what is expedient for the government of the day.

Our system of appointing judges and senior government officials need to be  politically neutral, and the Governor General is better suited to oversee such appointments than the Prime Minister.