FELDSTED: Over two years of government assurances that ‘all is well’ have worn thin. Evidence is mounting that the government has a major mess on its hands

In September, about a month after quitting the Conservative Party, Bernier founded the People’s Party of Canada. Pundits and rival politicians dismissed it as a vanity project, the product of Bernier’s bitterness after having lost the Conservative leadership to Andrew Scheer in 2017.

But in just four months, the PPC signed up more than 33,000 members and has become a thorn in the side of Scheer and the Conservative Party, which has been forced to protect its right flank on issues like immigration and identity. More importantly, the PPC now has electoral district associations in every one of the country’s 338 federal ridings. Considering the party was little more than an angry Twitter feed last fall, the speed of PPC’s rise is notable.

Bernier declined through a spokesperson to speak to the Star for this story, but has said he wants 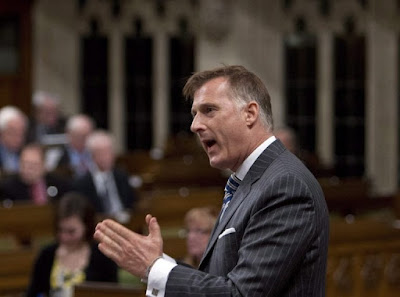 nothing to do with white nationalists. “Racists are not welcome in this party,” he told Montreal radio station CJAD in December.

Lumping together ‘neo-Nazis’, the ‘alt-right’ and ‘far-right’ -- while leaving out radicals from the lunatic left -- is hardly fair and balanced. Contending that this ‘problem’ is confined to Max Bernier and his People’s Party is ludicrous.

The “far-right” (and left) has been around for decades. The ‘far-right’ is a handy label for anyone who disagrees with liberal / left / socialist views and is used so often and indiscriminately it has lost meaning. There are extremists in all sectors of the political spectrum.

Extremists try to align themselves with any federal and provincial politician, or party, that might give them voice. No one is immune. Their following is too small to form a political movement, so they try to find a home within an existing party and work within it. The PPC is no more vulnerable than any other political party.

The innuendoes and slander are underway. Bernier and his People’s Party are making the political elite nervous. They have no leverage and no way to control a new political rival. What is most worrisome for the establishment is Bernier’s departure from traditional political party structure.

Political parties are protecting their turf, and the coming election will be a test of their hold over the electorate. We are already bombarded with the usual election year bombast. Fixed election dates have rendered the normal six-week formal election period meaningless ... except for Elections Canada and Elections Act purposes. The campaign is underway and will intensify over the next the next 8 months.

It is too early to predict what impact the People’s Party will have on the October election, but one thing is clear. Electors are offered a new alternative; election campaigns will never be the same again. The dynamics are changing and will not revert to what we have seen in the past.

A new factor in this election is the government’s failure to clarify immigration policy coupled with a failure to communicate with the public on immigration matters. That creates a caldron of potential for misunderstanding and fear.

Concerns over irresponsible immigration policies do not make a person an extremist.

Over two years of government assurances that ‘all is well’ have worn thin. Evidence is mounting that the government has a major mess on its hands, is not dealing with it responsibly and is not open and honest about the immigration portfolio.

An honest government would have squelched the allegations of interference in judicial affairs immediately. Instead we are faced with a tight-lipped: “Nothing to see here, folks. Move on please.”

As more information comes to light, the stench is growing. Why were amendments to the Criminal Code embodied in a financial Act? Why did the change escape scrutiny of the House of Commons Justice Committee?

The People’s Party offers to allow member independence and to put every issue up for discussion and debate. That may resonate with thousands of electors who are uncomfortable with having their representatives follow party orders rather than representing their interests.
John Feldsted
Political Consultant & Strategist
Winnipeg, Manitoba