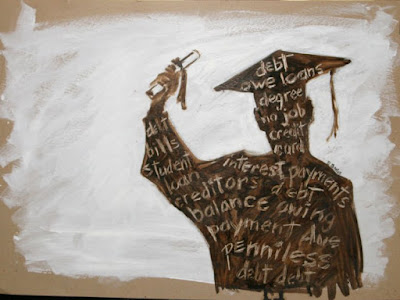 An editorial by Mel Rothenburger.

MORE THAN $163 MILLION in outstanding student-loan payments were written off this week by the federal government. The money is owed by more than 31,000 students who can’t or won’t repay the money.

It’s the latest sorry commentary both on the federal-provincial student loan program, and on the fact we can’t provide our students with a university education unless -- they go deep into debt.

It shouldn’t be that way.

Current debt under the Canada Student Loan Program totals a staggering $28 billion to all levels of government, according to one report. The B.C. Federation of Students says the average student loan debt at graduation in this province is more than $30,000. Many students spend as much as 15 years paying it back.

That is, those who do pay it back.

To be sure, a small amount of the problem involves fraud on the part of students who borrow the money and simply don’t try to repay it. But the bigger reason is that university tuition, books and living expenses are so steep that students simply can’t make enough through summer and part-time jobs to pay for their education.

According to the Canadian Federation of Students, the federal government is making hundreds of millions a year off interest fees on student loans.

In short, getting an education costs way too much. Both the Canadian and B.C. student federations are demanding that interest rates be dropped entirely on student loans, and some provinces have already done that on the provincial component. B.C. is promising to be next but it needs to go further.

Student loan programs need to be simpler, less onerous and more consistent across the country, and non-repayable grants programs expanded.

And, those taxes we call interest payments eliminated.

Mel Rothenburger is a former mayor of Kamloops and newspaper editor. He publishes the Armchair Mayor opinion website, and is a director on the Thompson-Nicola Regional District board. He can be reached at mrothenburger@armchairmayor.ca.