It’s a pity – no it’s actually disgusting-- that smaller and fewer newsrooms, owned and operated by fewer and fewer independent companies, will have the say on what gets shown tomorrow


Let any resource company try and build an approved pipeline, with the highest degree of safety measures anywhere in the world, and you'll see hundreds upon hundreds of (often time) paid protesters onsite, back-stopped of course by local infant toddlers holding (barely) protest signs ... all the way up to granny and grandpa too.

You’ll see hours of video ... news story after news stories by the so-called mainstream local, and national news outlets, showing this.  What they don’t show you however are the vast majority – excluding those foreign funded and paid protesters – that have NO IDEA what’s happening other than they have been told resource development is bad – will pollute – and will destroy.

In the midst of the real people of the land, are anarchists who’s only mission is to destroy.  AND THAT makes for great news --- great in the sense it is sensationalized, and creates a large audience for radio, newspaper, and TV.  An audience they flog to big business selling corn fluffs and soap buds, and all the necessities of life.

Just for interests earlier today, I took a minute (and indeed that was ALL it took), to see what news there is today of the national truck convoy protesting Ottawa's continued delays in getting pipelines built.

What did I see?  One story and one story alone in the National Post, CTV, and Global ... and not a single one was more than a couple hundred words.

Right now, hundreds upon hundreds of individuals from communities across Canada, are on the outskirts of Ottawa, where they will arrive tomorrow, including Brad Shell, supporting his son-in-law, the oil and gas industry, and Suits Boots and, just one of the organizations taking part.

And each and every one of the people taking part in this convoy to Ottawa is doing so on their own dime – THEY ARE NOT funded by U.S. interests who determined to see OUR recourse industry flounder and eventually die.

And the latest attempt by Justin Trudeau’s federal government is Bill C-69, which is before the Senate.

According to Suits and Boots founder Rick Peterson, there efforts are to see that government doesn’t let Bill C-69 pass! 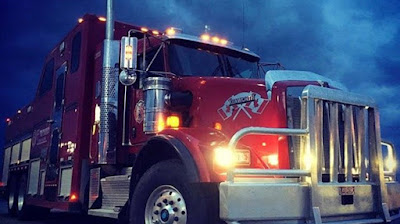 “If passed, this bill will choke off pipeline and resource development forever”, he stated

“Bill C-69 will instead turn what should be an assessment, into social and gender-based agent of the government – it WILL ADD further delays and interference to tie up projects forever”, he continued.

He further offered, “The unintended consequences of Bill C-69 will turn out to be the socialization of pipelines.”

That is likely one of the biggest reasons for the convoy – to try and show Senators the pain that is being felt not only in Alberta ... but right across the prairies, and British Columbia as well.

“Right now,” stated Peterson, “investments that should be made here, are instead going south of the border”

“What Board of Directors, from a private company in Canada, would think of investing here -- they’ll need to start with ONE BILLION dollars just to find out if they can get through an assessment?”

Tomorrow Ottawa will see hundreds of trucks descend on the capitol ... and show to Canadian politicians that BALANCE is needed when the federal government considers policies around oil and gas policies.  Will they listen?

Those involved with Suits and Boots hope to have an opportunity to speak to the Senate, and are optimist they will have that opportunity.  Their organization alone will be speaking for over 300 communities across Canada – only a third of which are in Alberta.

Proof, that the impacts of this issue are widespread!

Proof too that mainstream media should perhaps give it the attention it deserves, because of the tens of thousand s of families the resource industry affects.

OH, and yes indeed some of those involved will with the Yellow Jackets will indeed be there ... and I am sure that they will be used by the news media to sensationalize their reporting – that rather than showing the plight resource communities face.

It’s a pity – no it’s actually disgusting-- that smaller and fewer newsrooms, owned and operated by fewer and fewer independent companies, will have the say on what gets shown tomorrow.

Independent reporting, sadly, is disappearing, but big business doesn’t give a crap –nor does it seem the Canadian Radio and Television Commission (CRTC), who allowed it to happen.

In Kamloops, I’m Alan Forseth, and now I am very much interested in hearing what your thoughts are on this important topic.  Please take a moment to write them down in the Comments Section directly below this blog post.